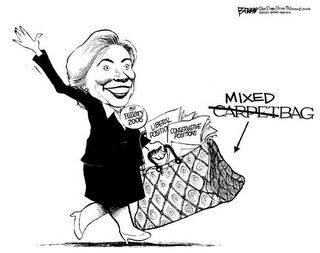 In an interview the other day, (I can't remember if it was CNN or ABC) Hillary Clinton was asked if the country was safer now than it was 5 years ago. Her answer? "It's safer, but not yet safe."

Have you heard that before? I have. It's the same answer Bush & Co are using.

I really can't stand her. I hate that she's the frontrunner for our party in '08.

We need to be the opposition party, of which she is not. We need a Russ Feingold, a Barack Obama -- a leader, a maverick. Someone who will stand up to the neocons -- and keep standing up until they go away.


9/11 Commission Gave F’s And D’s To The Bush Administration.

The 9/11 Commission gave the Bush Administration 5 F's and 12 D's on the implementation of the Commission's recommendations for homeland security.

I heard that Gore is starting to narrow the gap with her in the polls. I think he would greatly benefit from the fact he was against invading Iraq all along.
If I was him (and I decided to run) I would pound that point constantly.

The only problem I see with Gore is that the late night talk show hosts still use him as a butt for their stupid jokes. Unfortunately, that kind of crap carries a lot of weight.

Just saw some stuff with Gore recently , the kids still got it - still not convinced he'd break his old persona though. As for Hillary, I just don't think shes got what it takes (well just at the moment anyway).

Hillary certainly has the money... but I like to believe that she would just about have to BUY the nomination. I don't think she will get nominated because people in her party think she can win. She could end like Katherine Harris in Florida... that is, with people in her own party begging her not to run. But I would imagine that with all the power she would gain with a win, there is no way she would try not to win... because I think that is what she is about: power. Or maybe she is about Hillary, I can't tell.

I think Gore, Feingold or Obama would be much better candidates than Hillary Clinton. I think I would feel bad, feeling like I would HAVE TO vote for her in order to keep Republicans out of the White House in 08.

As for the 9-11 Commission's recommendations, I think a lot of lobbyists are working hard to keep the recommendations from being implemented because they are concerned that private interests would lose too much money. After all, making money must be more important than protecting America, eh! Why do those lobbyists (and especially the people they represent) hate America?

Not getting Bin Laden has certainly been a public relations disaster for the administration... I wish they could have caught him, though. I still suspect they may catch him just prior to the November elections.