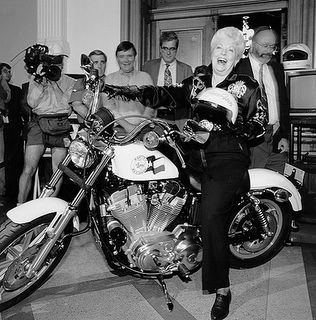 I couldn't let this week pass by without acknowledging the death of one of my all-time favorite politicians, Ann Richards. (Democratic Governor of Texas '91-'95.)

Ann was an inspiration and will be missed.

Richards's keynote address to the 1988 Democratic National Convention put her in the national spotlight when she uttered the famous line, about the wealthy, then-Vice President George H. W. Bush, "Poor George, he can't help it...He was born with a silver foot in his mouth." The speech set the tone for her political future; she was a real Texan who established herself as a candidate who appealed to suburban voters as well as to the traditional Democratic base that included African Americans and Hispanics.
Posted by Lizzy at 9/14/2006 10:01:00 PM

I loved her. She was a breath of fresh air in a state where the air seems to be pretty stale a good deal of the time.