"...the final nail in the coffin for President Bush's phoney argument about the Iraq war" 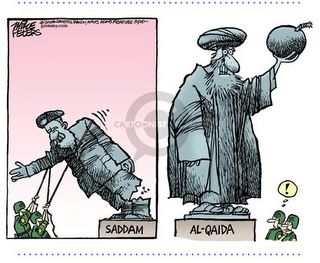 An authoritative US intelligence report pooling the views of 16 government agencies concludes America's campaign in Iraq has increased the threat of terrorism.

The National Intelligence Estimate was completed in April but not made public. Its conclusions, which were first reported by the New York Times, contradict assertions made by President George Bush and White House officials during the fifth anniversary of the September 11 attacks.

"It's a very candid assessment," said one official who has seen the report. "It's stating the obvious."

The report, Trends in Global Terrorism: Implications for the United States, points out the "centrality" of the US invasion of Iraq in fomenting terrorist cells and attacks. One section of the 30-page report, Indicators of the Spread of the Global Jihadist Movement, describes how the American presence in Iraq has helped spread radical Islam by providing a focal point for anti-Americanism.

While arguing that there has been success in dismantling the leadership of al-Qaida and its ability to plan major operations, the report says that radical cells have moved to more than 5,000 websites to organise and spread their message.

The report's tone contradicts recent optimistic assertions by the US administration. It also furthers the divisions between the military and politicians in their assessment of the impact of US policy in Iraq.

In his speech to mark the fifth anniversary of the attacks of 9/11, President Bush said: "The world is safer because Saddam Hussein is no longer in power. The safety of America depends on the outcome of the battle in the streets of Baghdad."

But in a speech in April, thought to be largely based on the report, CIA chief General Michael Hayden, then deputy director of national intelligence, painted a more alarming picture. "New jihadist networks and cells, sometimes united by little more than their anti-western agendas, are increasingly likely to emerge," Gen Hayden said. "If this trend continues, threats to the US at home and abroad will become more diverse and that could lead to increasing attacks worldwide."

Democratic senator Edward Kennedy said in a statement that the report "should put the final nail in the coffin for President Bush's phoney argument about the Iraq war. How many more independent reports, how many more deaths, how much deeper into civil war will Iraq need to fall for the White House to wake up and change its strategy in Iraq?"

Right on, Tedward. Great article, L.! I hope this gets a lot of play in the next month. I think it will be interesting to see how the GOP spins this one...

Spinning the findings of 16 agencies won't be easy, but I have every confidence that the Repub slime machine is up to the task.

I think bush called the findings of the 16 agenies "irrational".

What's that say about him?

Now, today, it looks like he is refusing to release the full report. Aha! Just as I thought. He isn't releasing the whole thing, not just because it might jeopardize "national security" or "the agents who gathered the information", but most likely because the stuff he's suppressing paints an even gloomier picture than the stuff that got leaked. Ick.

Speaking of ICK, I hear the Twin Cities will host the 2008 GOP convention. Eeeeeew!!!

Meh final nail, jesus Dubs underground and buried, someone get me some flowers.