Lizzy vs Mark Kennedy (no relation to the good Kennedys)

Tom & I met up with friends, Brian & Bekkah, at the "Great Minnesota Get Together" - the State Fair.

We go every year for the people watching, great food, and good clean fun. It's also a good place for politics. All of the parties are well represented, and often the candidates themselves will be there to meet the masses...as so it was today.

While walking past the Republican booth, they announced that US Senate candidate (& super-weenie) Mark Kennedy was in the house. We kept walking, but after getting some delicious fair food I said I have to go back & meet him. (When would I get another chance?)

Bekkah & I walked into the opposing party's camp with a greeting that could only be described as "unwelcoming." Ok, maybe wearing a Democratic Underground t-shirt along with a Proud Liberal button gave me away.

We made our way through the crowd (of only about 8) to meet Mr. Kennedy, and then there we were, face-to-face. He shook my hand, took a moment to read my shirt, and said, "I bet you have a lot of questions for me." I said, I only have one.

Me: Why don't you mention in your TV ads that you vote with Bush over 90% of the time?

Kennedy: Why doesn't Amy Klobuchar (his opposition) mention in her ads anything about Howard Dean?

Me: But, we love Howard Dean.

Kennedy turns his back and walks away.

While walking out, within Kennedys earshot, I say loudly, "he didn't answer my question," but by then we were getting looks that could kill so we made our way out.

While walking past a right-wing radio station, I noticed they were selling t-shirts that read "Liberalism is a Mental Disorder." I stopped in my tracks and said to Bekkah, "them are fighting words," so we walked over. I asked the lady selling them, "how can you sell these?" She looked at me with a glazed look in her eyes & said nothing. Then I said sarcastically "...because the conservatives have done such a great job over the past 6 years?" Still no response. So I tried again to engage her with, "Yep, this country is in wonderful shape." She just sat there - brain dead, so lastly I asked, "aren't you going to say anything?" She said something like "keep it coming," but by then I had had enough of her strange gaze, so we left.


Fun at the fair! 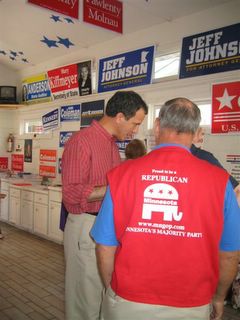 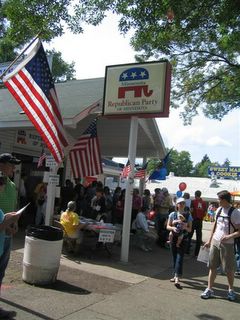 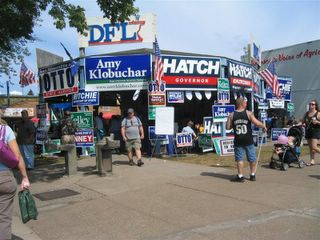 Democrat booth (where all the action was...and the good vibes flow) 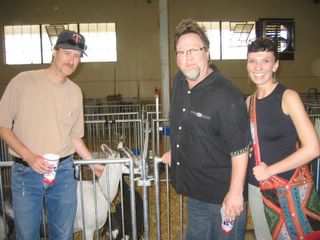 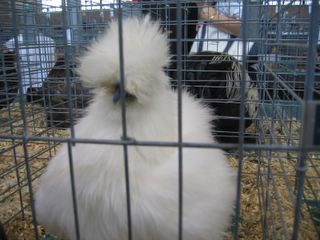 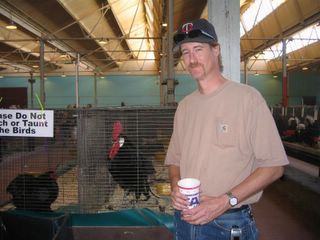 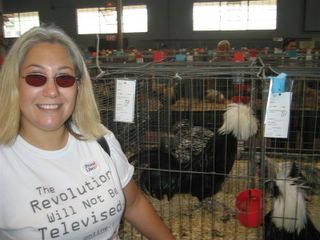 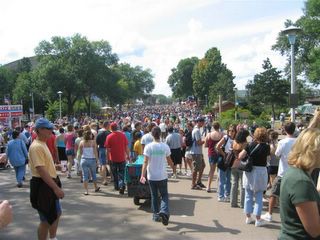 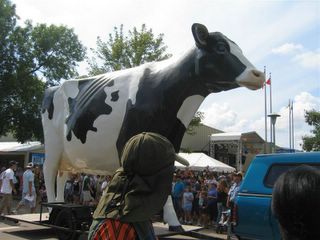 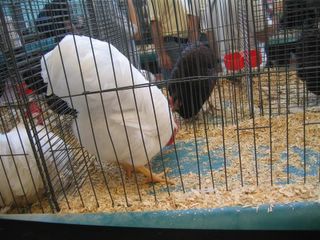 Good for you, Lizzy. Face to face confrontation! That is really admirable.

Yay, Lizzy! You look great, by the way. It doesn't surprise me that the 'Pubs had nothing to say. I'm willing to bet they had their mouths hanging open, gasping for breath.

Kick'n pics too, looks like a blast - hmmm little to crowded for me - I hate crowds.

Also, good job in the face-to-face mode. Keep going for it! And, Go Amy!!!