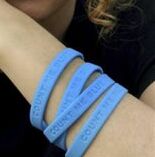 Do we really need to show colors? The true masses will decide.I care deeply about the state of our state, but instead of wearing wrist bands, we need to show a physical force. This is now a fight! The enemy doesn't show its colors, it simply attacks. Isn't it time that the left stands up for what it believes in? The right wing rhetoric is only skin deep. 100 days into its second term and its still spewing the same shit from six years ago. We now need to fight fire with fire!!!!

I agree with you, anonymous. I just think the wristbands are a cool way to show our unity - nothing more.

fight the physical fight? (i know a few righties i'd like to thump in the head with a wisdom stick).
but the only way to stop these bastards is at the polling booth and i know where my vote went, down the crapper. . . i could use one of those here in a red state, my 'no bush' button is getting worn out. . .
i think the repubs have been denegrated to a defensive mode lately, but dubya has a way with the press to beat the drum of deceit so hard and loud as to make the weak fall into lockstep when the time is right, it ain't over yet. time is against these war-mongering, bible-thumping, god-fearing zealots,(read:republicans), and the tide is turning, but any little thing helps our cause.