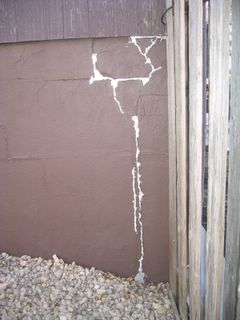 Our house was built in 1958. My parents bought it in 1967, when I was 2. After they passed away, my siblings & me inherited the house, but I get to live in it because they have their own homes (& my bro lives in NY.)

Over the last couple of years, my fiancé & I have been busy making the house "ours." We pulled up the wall-to-wall carpeting and had the original hardwood flooring refinished. We painted all of the upstairs rooms and have replaced practically all of the furniture. We took the house from 80's contemporary to mid-century modern. Next up, the basement and the house's exterior.

As I was getting estimates on vinyl siding, I noticed that this crack has gotten worse. (The white goop in it was put there as a barrier to bugs.)

If this crack in the foundation is really bad, Tom & I will consider moving sooner than later. We had planned to move sometime in the future, but I was putting that way on the backburner until I found out what his side was bringing to the table.

I'm having a foundation guy look at the cracks on Monday. In the meantime, is there anyone out there that knows about this stuff? Does this look bad?
Posted by Lizzy at 4/07/2005 10:28:00 PM

Is that your only crack (man, so many quips to be had with the word "crack")? Might not be too bad.

There are other smaller cracks, but this one is the worst.