Remember when Joe Lieberman was re-elected to the Senate as an Independent, he said that he still considered himself a Democrat and would caucus with them?

Today, that went out the window. 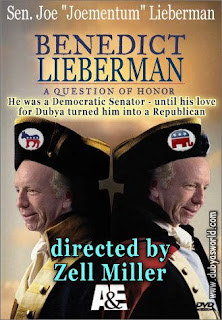 The Senate passed the bill on a 51-to-47 vote despite a veto threat by Bush. The vote was mostly along party lines.

Lieberman, a longtime Democrat who won the November election as an independent, joined 46 Republicans in opposition to the bill. Connecticut Senator Chris Dodd and 47 other Democrats voted in favor, as did Vermont independent Bernard Sanders and Republicans Chuck Hagel of Nebraska and Gordon Smith of Oregon.

The bill would provide $123 billion for the wars in Iraq and Afghanistan. It also orders Bush to begin withdrawing troops within 120 days of passage and sets a nonbinding goal of ending combat operations by March 31st, 2008.

The war is in its fifth year and has cost the lives of more than 3,200 American troops and more than $350 billion.

I'm so done with Lieberman. He hasn't been one of us for a long time, but this was the final nail in the coffin. At this point, he might as well join the RNC.

And, if I really had it my way, I'd have him thrown out of the tribe, along with Paul Wolfowitz, Richard Pearl and Henry Kissinger. They are an embarrassment to my religion.

I think Lieberman is the biggest diva in the country. Britney Spears and Lindsay Lohan can't touch him when it comes to self-absorption and constant pouting. Everyone is sick of his constant threats to bolt the party and join the Republicans. If he goes to the other side I bet at least one Republican will bolt to the Democrats and keep the Senate Democratic. We don't need Lieberman.

Lieberman, or the Zellbilly either for that matter.

Hey, Lizzie....you mean that a guy who had his friends support, money and organization which enabled him to be elected a U.S. Senator, plus had them name him as a candidate for the high office of Vice President of the U.S., can't just spit in their faces and jump ship when his party constituents disapprove of him?
Silly girl!

I agree, Tom, we don't need him. You gotta wonder if there already are Senate Republicans waiting for the right moment to make the switch. There has to be. Personally, I don't consider the Bushites to be real Republicans...they are something else altogether. I bet there are Repub Senators that don't recognize their own party anymore, and are contemplating moving to the other side of the aisle. The question is, who?

Nope, not in my world, Uncle Richard. Glad we're on the same page on this one, but in retrospect, we usually are 99% of the time.

This guy ought to tried for treason! Meshugine is the word that comes to mind.

I'll bet he's got a lot of gelt to throw around though. Oi!

I'll just bite my tongue about the rest.

LIEberman is a fucking asshole and poor excuse for a Senator. He is one of the worst Republican Tools on Capital Hill.

We really need to pick up some more Democratic Seats in the Senate in 2008 so we can marginalize the fuck wad.

His big power trip now is that he feels he can hold the whole Democratic Senate hostage for his one vote, demanding and screaming that he gets his way.

We should keep him to the curb.

Lieberman may think he's the man now, but this will be his last term. I would put money on it.

Keeping Lieberman to the curb is a great idea, especially if we are talking big city stuff here. He belongs next to the curb with all the dog doo.

I would also guess that this will be his last term. I'm sure the Republicans view the 06 elections as an aberration, and that they think they will be back in power once 08 comes around. I think they will be in for a sad surprise. I would look for their margin in the House to stay the same or increase, and maybe see something like 54-46 or 55-45 in the Senate. I look forward to Norm Coleman getting defeated from your state, Lizzy. THAT will be a true treat. I'm not so sure Gordon Smith is a lock here in Oregon, either... look out for Portland Democrat and U.S. Rep. Earl Blumenauer, or maybe former Oregon Gov. John Kitzhaber.

"Come senators, congressmen
Please heed the call
Don't stand in the doorway
Don't block up the hall
For he that gets hurt
Will be he who has stalled
There's a battle outside
And it is ragin'.
It'll soon shake your windows
And rattle your walls
For the times they are a-changin'."

Bob Dylan wrote those words 43 years ago... they still ring so true to my mind. Those who hurt will be the ones who have stalled, and those will be the Norm Coleman, John Cornyn, John Kyl etc. types who are so well practiced at the art of the goosestep.