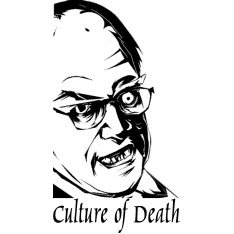 As an agnostic Jew, I don't really believe what I'm about to say, but I thought I'd put it out there, just for fun.
In 1978, when he was 37 years old, Dick Cheney made a deal with the devil. He made this deal while having his first heart attack. In return for his life, he promised Satan that he would do everything he could to destroy America, which in turn, would make the entire world a much worse place, and assuredly bring about the end of days.
Satan took the deal.
Over the years, G-d tried to step in and take Cheney out by striking him with 3 additional heart attacks, but the dark force was too strong. Lucifer covered him.
However, G-d hasn't given up yet. He tried a different tactic today, but it didn't work. I'm sure he'll keep trying.

WASHINGTON, March 5 — Vice President Dick Cheney was treated today for a blood clot in his left leg that independent experts said was probably not related to his history of heart disease, but rather the result of his recent around-the-world trip, which included 65 hours of plane travel over 9 days.
Mr. Cheney’s office said the vice president experienced “mild calf discomfort” sometime after delivering a late morning speech to the Veterans of Foreign Wars and visited his doctor’s office at George Washington University.
An ultrasound revealed a deep venous thrombosis, a blood clot, in the lower portion of his left leg. He was treated with anti-coagulant medication, which he will take for several months, and he returned to work. Although blood clots in the leg can be dangerous if left untreated, experts say most are successfully treated with the anti-coagulant drugs that the White House says Mr. Cheney is now receiving.
In September 2005, Mr. Cheney underwent surgery to repair aneurysms, bulges in the arteries that can spawn dangerous blood clots, behind both knees. Doctors implanted devices known as stent-grafts in each of Mr. Cheney’s legs.
Posted by Lizzy at 3/05/2007 07:23:00 PM

Things keep mounting up, not just for Bush, but for Cheney too. We have had to endure his Chicken Little crap during the last few weeks, and he is quickly becoming the Vice President who cried wolf. He makes his warnings, people don't really pay him any mind. The Libby thing is a stressor for him, I'm sure, as he has probably had to go out of his way to make sure all his bases are covered. The heart attacks, nearly getting blown up in Afghanistan, and now the blood clot.

Things are happening to him so fast, I have to wonder when his situation will reach "critical mass"...

I'll be very surprised if he doesn't retire fairly soon.

Thanks, Snave. It sure feels like it has reached critical mass, but it probably hasn't. We'll likely hear of several more scandals before the week is done.

Cheney should retire...and go to some undisclosed location, never to be heard from again.

Cheney has to retire before this fall to make way for the next Republican candidate for President.
It's all in the plan.