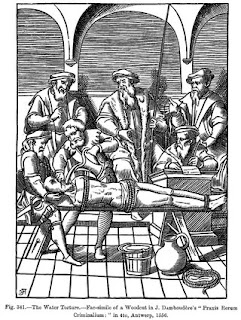 Al-Qaida No. 3 says he planned 9/11, other plots
Today we've learned that Khalid Sheikh Mohammed has confessed to the murder of Daniel Pearl. In addition, he said “I was responsible for the 9/11 operation from A to Z.” He has also confessed to the 1993 World Trade Center truck bombing, as well as planning to take down a second trans-Atlantic aircraft during would-be shoe bomber Richard Reid’s operation.
But, that's not all...
He also confessed to trying to kill international leaders including Pope John Paul II, President Clinton and Pakistani President Pervez Musharraf.
AND:
The 2002 bombing of a Kenya beach resort frequented by Israelis.

The failed missile attack on an Israeli passenger jet after it took off from Mombasa, Kenya.

The 2002 bombing of a nightclub in Bali, Indonesia.

Nope, that's still not all!
Other plots he said he was responsible for included planned attacks against the Sears Tower in Chicago, the Empire State Building and New York Stock Exchange in New York City, the Panama Canal, and Big Ben and Heathrow Airport in London.
In the days ahead, we will also learn that he was responsible for:
The kidnapping of the Lindbergh baby
The disappearance of Jimmy Hoffa
The Zodiac murders
JFK's assassination
Hiding the plane parts of the 757 that crashed into the Pentagon on 9/11
Killing Elizabeth Short ("The Black Dahlia")
Being Jack the Ripper
Breaking up The Beatles
1871's Great Chicago Fire
The summary execution of Che Guevara
Being the real Son of Sam murderer
Killing the 3 little boys in the West Memphis Three case
Avian Bird Flu
80's fashion coming back
The Macarena
It's amazing what a little water-boarding can accomplish.
Posted by Lizzy at 3/15/2007 02:43:00 PM

Yeah I think he also said he was on the grassy knoll!!!

Oh wait you had that, I think he said
hes the reason cats and dogs hate each other.

I'm pretty sure he is also the one behind Britney's latest implosion/haircut.

I'll bet he knows where Elvis is hiding!!!!

Wasn't he also the guy that killed John Lennon?

Good answers, guys. I especially like Damien's "he's the reason dogs & cats hate each other."

Like I said on Polishifter's blog, KSM is also behind Plamegate and firing the 8 US attorneys, as well as all of the other BushCo scandals.

Looking over the list...
He also confessed to rigging the 2000 Presidential election.

Torture (or relief from) as an incentive he would have confessed to being both Bush's biological father, and mother and a true believer in the baby Jesus.

The War on Christmas? Yeah, that was him...

Don't listen to that wacky KSM. He's just one of those crazy people who enjoy confessing to things they didn't do.

In reality, I did all of those terrible things he's pretending he did. It was ME!!! BWAAAHAAHAAHAAA!

Reminds me of the classic dialogue in Reservoir Dogs where Chris Penn's character, Nice Guy Eddy, admonishes Michael Madsen's character for torturing a cop, " If you beat this prick long enough he'll tell you he started the goddamned Chicago fire, but that don't necessarily make it fuckin so!" Looks like the Bushies could learn a thing or two from Tarantino movies.

Since watching "Reservoir Dogs" I have found it tough to listen to "Stuck In The Middle With You" by Stealer's Wheel... That might be one of Alberto Gonzales' favorite scenes in all of moviedom... either that one or Mel Gibson's agonizing death scene in "Braveheart". Frank Zappa once did a song called "The Torture Never Stops", another tune with which Gonzales is probably familiar.

Actually, 1138, he confessed to rigging BOTH elections!

Yes, J, he DID start the war on Christmas! How could I forget?

Davidovich, KSM is amazing. He can morph into any shape, including the magic bullet. He's all powerful.

elvez, Reservoir Dogs is a great film. I wonder if Gonzales got his idea that torture is okay from it. Too bad he was probably in the bathroom when that line you quoted was uttered.

Snave, I can't listen to that Stealer's Wheel song without thinking of that scene either.

"Stuck in the Middle With You"
Freshman year high school study hall - I can't put any other context on it.
A study hall with a juke box was the only thing that school had going for it that and state football champions, but really the juke box and Stealers Wheel.

Oh and Nixon was President back then, the more things change the more they stay the same.