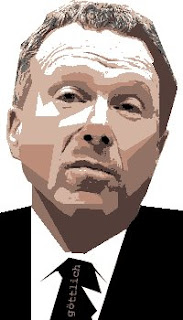 This IS good news. I am still disgusted that people like Armitage and Novak aren't also in trouble... and of course it has become rather apparent who is behind all of this crap, but will the Dickster ever get his due? What can happen now to get the ball rolling re. Cheney? In this case, it seems like every time Karl Rove or Cheney gets mentioned as being behind the whole sordid business, all the defense systems and force shields go up. What can be done to penetrate those defenses? Is this something for which a Congressional investigation could be requested?

I'll need to learn more, I just heard the news while in the car between schools a couple of hours ago! And yes, GREAT news it is.

That, along with the probe about people in the judiciary being fired because they wouldn't put pressure on Dems the GOP wanted to indict prior to the November elections... added to the military hospital scandal...

Things are getting fun in Washington, D.C. Bush would like to be a Teflon president like Reagan was, but it seems like there are too many bad things happening now for him to evade them all. The more things that stick, the worse it gets for him.

While I wallow in schadenfreude at his travails, I also have to keep in mind that all this crap is BAD FOR THE COUNTRY. All the more reason to get the sucker and his buddies out of power ASAP.

One good 'ole boy down and many more to go. Yee Haw!!!

This is great news. I don't really care if Libby does jail time or not (he probably won't), but this trial and verdict (and his appeal) will keep the whole Iraq shebang in the headlines for a long time. The public should get curiouser and curiouser about why Bush and Cheney deceived us into invading Iraq, and why they were so determined to destroy anybody who provided conflicting information.

I wish this was going to turn into a house of cards for the Bush admin, but I'm rather pessimistic. I think Bush will pardon him.

My greatest hope is that Libby will do the right thing, and spills the beans on EVERYTHING.

I hope you're right, guys. This should be the beginning of the end for BushCo. We have to put pressure on the Dems to start the impeachment proceedings.

Yes Lizzy,
I agree with you totally. I think he'll wait till the end of his term to do it though. And use it as a political tool. Why is Cheney so untouchable? Thats what I don't understand. Like flies on shit!

WE have to remember that this was essentially a closed investigation by grand jury.
The only thing Libby got in trouble for was lying to the grand jury.
BushCo. got off the hook on the outing of Plame and smearing of Wilson, and if we don't watch it the same for the lies to war.

The conviction of Libby is a good thing, but the sad, bad lesson from all of this is that this administration damaged national security to cover a lie to war - and nobody is being held accountable.
Nobody

Wingnuts are all in a twist claiming this was an "unfortunate" ruling. They are blaming the jury. Conservative thinktanks are calling on Bush to Pardon Libby just hours after the ruling.

Bush and Cheney are very sad for the Libby family

Are we in fucking bizzaroworld or what?

I concur with Polishifter, all you here from the conservatives... pardon Libby.

You must admit, when it comes to talking points the Republicans are good at it.

Yep, all you are hearing from the right is that the jury was confused, and that Bush should pardon Libby. No one is going to be held accountable for this, or anything BushCo does.

It is a very sick state of affairs, and I've had enough. With impeachment being off the table, according to Pelosi, what are we supposed to do?