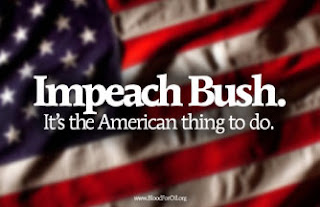 I must get 20 emails a day from various Democratic leaders, liberal/progressive organizations, and fringe groups. They all want me to sign this petition or that petition, make phone calls, donate money, etc. While I do all of the above, I gotta say, I'm sick of it.

I want impeachment put back on the table. Period. Until it is, I'm tempted to tell most of them to shove it.

Bill Maher is right when he says that Democrats never up the ante.

Our elected Dems should be ashamed - it took a hard-right Republican, Chuck Hagel, to bring up the "I" word in public...

The conversation beaches itself for a moment on that word -- impeachment -- spoken by a conservative Republican from a safe Senate seat in a reddish state. It's barely even whispered among the serious set in Washington, and it rings like a gong in the middle of the sentence, even though it flowed quite naturally out of the conversation he was having about how everybody had abandoned their responsibility to the country, and now there was a war going bad because of it.
Posted by Lizzy at 3/28/2007 08:51:00 PM

Once again Lizzy, this IS an accountability issue here. And the only way I see this ever happening is to get support from both sides of the fence. The people ARE speaking, but are our politicians really listening?

The president and his henchmen seem to have their own agenda about the way things are going to happen. And they seem to be able to control their own destiny. And it needs to stop now.

Lizzy, don't stop kicking and screaming screaming until you get the answers you want. It's been a six year uphill political battle, but there is light at the end of the tunnel.

You know six months ago I was against impeachment, but now like you Lizzy I see it as the only appropiate course that we should take. These guys are an absolute criminal cartel and they need to be punished, if in 08 Rove at least isn't sitting in a federal prison then there is no justice in the world.

I will soon be just about executed within my own community for writing what will be the first letter to our local paper advocating impeachment and listing four major genuinely impeachable reasons: knowingly using faulty intelligence during the run-up to war, warrantless wiretaps, attempts to concentrate power in the executive branch, and violating the Geneva Convention (which is the law of the land according to our Constitution... once we sign on to a treaty, it becomes law).

I know I am going to get hammered with negative responses, but I already have a letter ready for response... I get tired of all the "You must hate America", "You like to blame America first" and "Well if you don't like America, move to Canada" crap, so my rebuttal will basically say to all these yahoos that if they think the Constitution is antiquated or that it needs to be tweaked, maybe THEY should be the ones to move to some other country or join another country's military. If I get responses saying things like that about the Constitution, I will absolutely ask them "Why do you hate America?"

It may not be fun becoming a local pariah, but then again it may! I'll print the letter on my blog once it gets printed in the local paper.

I'm glad you've seen the light, elvez. If there was ever a President that deserved to be impeached, it's GWB.

I wouldn't see it as being the local pariah, Snave. You're trying to wake people up. I can't wait to read your letter.