For the times they are a-changin'...BACK 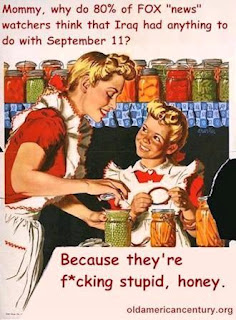 I don't know about you, but when I hear the mainstream press describing how the far-left or "radical fringe" is driving the Democratic Party, or how lefty bloggers are shaping the candidates, it warms my heart.

After 6 years of the pendulum swinging all the way to the right, it's about time we had our say.

However, with that being said, I'm not entirely sure that the Dems should have pulled out of the debate on FauxNews. For a certain segment of the population (the ones that only get their "news" from NewsCorp), that may have been their only chance to get an alternative, or correct, point of view.

But, in the end, I respect their decision.

The letter makes no reference to a crusade by the liberal activist group MoveOn.org to boycott Fox, which it calls a "right-wing mouthpiece." Democratic presidential candidate John Edwards dropped out of the debate on Thursday, citing in part Fox's participation.

The letter also does not specify which comments by Ailes lead to the decision, but a Democratic source told Reuters it was a joke Ailes made about Obama and President Bush during a speech on Thursday night.

"We cannot, as good Democrats, put our party in a position to defend such comments," Collins and Reid said in the letter. "We take no pleasure in this, but it the only course of action."

Fox News Vice President David Rhodes responded with a written statement criticizing the Democrats for caving in to MoveOn.org.

"News organizations will want to think twice before getting involved in the Nevada Democratic Caucus, which appears to be controlled by radical fringe out-of-state interest groups, not the Democratic Party," David Rhodes said in the statement.

Do you think Faux would have presented it in a manner that would have done good?
I don't - and didn't even before the chief of faux news made his stupid statement.
But his statement certainly made it clear that there is a deliberate bias from the top down in his organization.

Yes, Fox News is an antidote to all those leftwing America-haters who think Iraq wasn't connected to 9/11 and that Saddam Hussein didn't have Weapons of Mass Destruction. We need to fight them over there so we don't have to fight them over here. Or something.

They needed to pull out.

I doubt seriously the Knesset would have a "Meet The Candidates" forum that was being hosted by Joseph Goebbels. And this is equivalent.

Bob Roberts, I like that. I find mysely drawn to Fox occasionally. Just to reaffirm what I already know. Plus its always good to stay informed of what the enemy is up to. You know the old adage. "Keep your friends close, but keep your enemies even closer" Although, I think they are all slanted to some extent.

I simply loathe FOX "News". Thanks for putting that picture up, Lizzy! I had a good LOL moment there!

Who would have been the moderator of the debate? Had it been set to be one of the talking heads from FOX, we all know how the questions would have tended to lean. Anyway, I don't think candidates should have to spend so much time defending themselves that they can't get their points across on the real issues... FOX would like for any Democratic candidate to have to waste time defending themselves, because FOX doesn't want Americans to hear common sense ideas coming from the left. If the Republicans can keep their rightwing doofii spouting or butt-trumpeting slogans and catch phrases while the lefties can do nothing be be on the defensive, the GOP can keep winning. Mommy's answer to the little girl is correct... people will buy into that kind of crap.

After all, isn't it more entertaining watching someone at the mercy of masters like Sean Hannity or Bill O'Reilly having to defend themselves all the time... or more comforting to have those planted suspicions "confirmed" by talking heads... than it is interesting to hear politicians and commentators discussing boring stuff like proposed legislation, global warming, and war in the Middle East? Sure it is! It's a LOT more entertaining, and that means there is lots of money to be made in it.

It seems like politics becomes more like the Jerry Springer Show all the time. People only really seem to enjoy politics anymore when folks shout at each other, call each other names, or get into fisticuffs or even a melee.

I long for civil discourse, and for genuine and honest debate. And, I long for reason to dawn upon America and its people. An institution such as FOX "News" seems to take the opposite view. Having them sponsor a debate is like Hormel sponsoring an animal rights conference, or ExxonMobil sponsor activities which prevent global warming... or it's like those anti-smoking ads on TV that are sponsored by Philip Morris Co.

Let's have organizations that are generally viewed as politically neutral run the debates.

If Faux News would stop acting like Bu$hCo's "Amen" chorus, maybe they wouldn't have this kind of problem?

On the other hand, if there was not Faux News, where would I get so much good blog fodder?

1138, Yeah, you're right, but the Dems should have handled it better. Instead of saying that they are not doing the debate because of what Ailes said about Obama, they should have said they're not going to do it because of the continued Republican bias.

Tom, Yes, the "we have to fight them over there..." crap makes me want to pull my hair out. First of all, they are already over here, and second, the insurgents that are in Iraq are not about to start swimming to NY!

jollyroger, That is a great analogy! Perfect! (And, welcome to my blog) : )

wf, Bob Roberts is one of my favorite films.

I understand the "keeping your enemies close" angle when it comes to watching Faux, but personally, I can only take it in very small doses. Plus, I'm always worried that if I flip to FOX, that will count as a ratings point for them. It may be a little paranoid, but I think we have a right to be paranoid in this day & age.

Snave, You're welcome. That pic always gives me a chuckle.

Excellent points, as always. Your analogies "it's like Hormel sponsoring an animal rights conference, or ExxonMobil sponsor activities which prevent global warming" is right on. The more I think about it, the more I realize that the Dems did the right thing. Can you imagine someone like Brit Hume being the moderator? Ahhh, no thanks.

kvatch, Yep, FOX provides us with a ton of good blog fodder, but I still wish they would go away...and take BushCo with them.

"Instead of saying that they are not doing the debate because of what Ailes said about Obama, they should have said they're not going to do it because of the continued Republican bias."

I thought that was what they did, but then the media spun the Edwards statement.

Fox has a vested interest in making the Democratic party look bad, and it's unprofessional reaction to the withdrawal is even more evidence of that.