It's your move, Karl 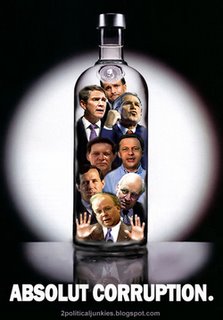 With all the despicable & criminal acts that we've had to endure over the past 6 years from the absolute power of this Republican party, it appears that the Foley scandal may be the one that finally crushes them. Issues like illegal NSA wiretapping or the National Intelligence Estimate that concluded that we are less safe because of the war in Iraq is too complicated for the general public...but they do understand what Ex-Congressman Foley did.

The question is... what is Karl Rove going to do about it? My prediction? A new threat! In the next couple of days, or weeks, we are going to hear that they've "uncovered" a terrorist plot to take out the Statue of Liberty, or something like it. Our threat level will go to orange and the mainstream media will eat it up. We won't hear about Foley, or the cover-up -- it will be 24/7 reporting of the new threat.

Maybe I'm naive but I don't think the American people (yes, even the Red Staters) will be taken in by an October Surprise.

I'm not even sure how much Rove cares anymore since Dubya can't run again...

As far as Rove goes, I don't think we'll see the last of him in '08. I just don't see him letting go of his power.

I think it's too bad we seem to be hearing more about Foley than we are about all the damning tales o' scheise Bob Woodward describes in "State of Denial". My hope is that this will become one of the most widely-read books of the year. I almost think it should be required reading for all of us!

Then again, yes, it may be too complex for the general public... a sex scandal is much easier. I heartily confess to unabashed schadenfreude about the Foley thing, and I believe the left doesn't really need to push this scandal a whole lot; Foley and his party will be punished plenty enough by the religious fundamentalists who may not bother to go vote, out of their sheer disgust at being used by power-crazy charlatans.

I hope Karl will stay out of this one. I don't really know what he could do to spin it, so yeah, if he did anything he would suggest to Bush and Cheney that the terror alert level be driven up, or that some "foiled attacks" will be revealed... they don't really have any other way to get people's votes anymore.

I watched Woodward's interview on 60 Minutes. I have to get that book. I hope his book can do for the Bush admin what his reporting did for the Nixon admin.

I agree with you about the left staying out of the Foley scandal. We can sit back on this one and let the Republican party implode from within.

Man, this really is starting to be fun! What is it about the right-wing/bible-thumping/wacko faction and sexual fucked-upness? There's some thread that runs through the stars and stripes crowd that seems to always have a pervo/porno stew bubbling just below the surface. I'm just getting the greatest joy watching the strange fruits coming forth from the tree of corruption and evil. I have a feeling this is the tip of the iceberg. You can't be as amoral as this administration without having a whole lotta creepy shit going on behind closed doors. Yahoo!

Kinda makes you wanna do a little dance. : )

The Republicans created this sex monster (no I don't mean Mr. Foley).
They did it when they persecuted an American President for private behaviour and then required the publication of all the dirty little details.

Why not sex? It's not a trivail item, most Americans can relate to sex and betrayal better than they can the real issues.

After all we tossed aside the rule of a God appointed king using taxes on tea as justification.

Ahhh would that be an Orange alert for all Republican pages, okay boys and girls head to the car park and the national guard will bus you home.

"There's some thread that runs through the stars and stripes crowd that seems to always have a pervo/porno stew bubbling just below the surface."

Thanks for that line... I thought I would lose my breakfast from laughing so hard!!!

And it IS worthy of dancing, isn't it! I hope we have a whole lot more reasons to dance after November 7.