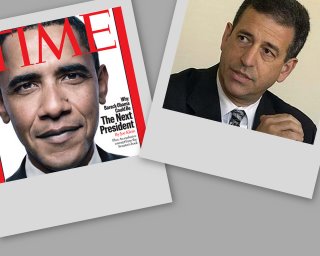 I don't watch Oprah's show because it's on the same time as CNN's Situation Room, but today I made the exception. Barack Obama was her guest for the entire hour.

Like I said back in April when I saw him in person, I couldn't be more impressed by the Illinois Senator. This guy has it all.

While he won't answer the question if he'll run or not in '08, I think all bets are on that he will.

My dream ticket would be Feingold/Obama or Obama/Feingold, even though I'm quite sure the country isn't ready for a Jewish/Black ticket...which is a crying shame.
Posted by Lizzy at 10/18/2006 11:05:00 PM

I like Obama. I hope the Dems make him Senate majority leader if they win back the Senate. He loves his country, he wants to serve all Americans, not just lefties. I put Feingold in the same category... They would make a wonderful team!

I agree. Obama would make a great Senate majority leader.

I was discussing him with my sister tonight. The more we talked about him, the more I realized he is The One.

I saw Obama on Meet The Press today and all I can say is Wow, this guy is absolute presidential material. He is now my 1st choice since Mark Warner has bowed out.