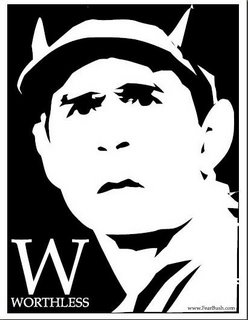 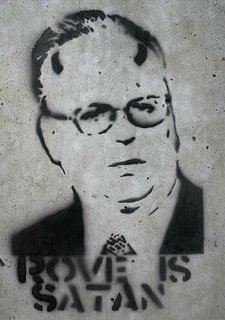 However, I do think it is gradually becoming apparent that he is not infallible. A leftist victory next Tuesday will drive a sort of nail into Rove, and slow him down a bit. It probably WOULD take a wooden stake or silver bullet to finish the job, and that could well happen if the Democrats pick the right person to run for president in 2008.

As for Bush? It is easy to say he is "toast" at this point, but I keep having to remind myself that the Dems haven't taken the House or Senate back yet, and even if they do there will still be more than 800 days left in the Bush presidency... still a LOT of time. AND, Rove is still a "genius", at least for the moment.

Given all that, I am feeling pretty good about next week. I don't even view it as a David versus Goliath thing. The GOP does seem kind of Goliath-esque, but I think that is an image they have carefully cultivated, a kind of "you aren't going to beat us, so why ever bother trying" attitude. Well, a well-placed and well-flung rock or two CAN make a big difference. And when the target has been as easy as the GOP has been during the last couple of years, it seems pretty tough not to win. In this case, it's kind of like the giant is stumbling around blindly, and the little guy with the sling is taking careful aim at a bulls-eye on the forehead from about a foot away. Premature celebration might be the only thing that could get the little guy in trouble....

Mailed in my absentee voter ballot. I'm now on permanent absentee status. Feels kind of good to hang out in my living room and fill it out at my leisure.

Snave,
I agree with everything you wrote.
And, I'm feeling fairly confident about next week, as well. I think the House is "in the bag," but the Senate is very iffy.

Moto,
Voting at home does sound nice.
I decided not to vote absentee because we still use paper ballots. However, if our district ever moved to touch-screen voting, I would do the same thing you did.

Worthless sums it up nicely

How anyone can STILL be a fan of Bush is beyond me. Even his wife is reeling from him.

The guy is a fucking loser.

Do you know how at risk your mailed in ballot is?

I've voting in person on a stupid machine without paper.

That will change after we get our new Secretary of State, every candidate for the office has committed to changing the machines.

The bad news is that Diebold machines can be faked, even with a paper trail.

This may be the last election I vote in if I see fraud like the last 3.

I have really gotten to the point where I'm ready to believe that the system is broken, and won't be repaired through legislation.

Worthless is right, and Rovie what an idiot. If someone sees Rovie in public can they please throw something at him, you know like a
Chevy Suburban.