My friend, Brian, emailed me this story. It's, as they say "troubling," to say the least. 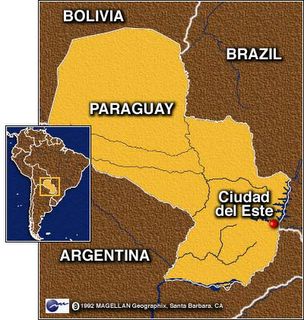 From Bring It On!

On the surface it looks all very innocent, but lets add the very quiet trip that Jenna Bush made to the country earlier this month in which she met Paraguayan President Nicanor Duarte and his family at their official residence. She also met with U.S. Ambassador James Cason. Could it be that our little drunken Jenna is all grown up and playing diplomacy?

This all still seems very innocent on the surface, but now lets add the five hundred U.S. troops that arrived in Paraguay with planes, weapons and ammunition in July 2005, shortly after the Paraguayan Senate granted U.S. troops immunity from national and International Criminal Court (ICC) jurisdiction. Neighboring countries and human rights organizations are concerned the massive air base at Mariscal Estigarribia, Paraguay is potential real estate for the U.S. military. Does Bush plan on being charged with something in the future? Does Bush foresee a collapse of the United States and feels a strong need to have a place to cut and run to, or does Bush just need a nice secret little place other than Gitmo where he can send people he doesn’t like?

Mr. Bush, could you please tell us what your intentions are and whether these intentions are hostile toward the people of the United States, or do you just intend on retiring to Paraguay?

My initial suspicion would be that Bush is thinking about the Bolivian government and it's anti-US stance. If the land is in northern Paraguay, this reeks of some kind of plan to threaten Bolivia. It seems that nation might be easy to invade and take over, after all. Maybe some of the troops the administration brings back from Iraq could be sent to Paraguay. Anyway, if those pesky South American nations won't do what we ask, then by god, we had better get down there and teach them a lesson! Heh...

Then again, why would Jenna Bush be going down there? Certainly SHE wouldn't be going there for anything other than family business, right?

The thought of Dumbya having to face one of his own tribunals is just... too pleasant! And probably too unlikely to happen... Although one never knows what could really be up with the land purchase and with sending the troops there...

Whoa nelly did'nt Butch Cassidy and
the Sundance kid hull ass down to Paraguay, could that be that Bush Cassidy and co are really going to try and run from the possie. Hey
grab a horse and I'll met everyone at the Washington memorial at high noon.

I want to say nothing to be concerned about.
I can't quite bring myself to do it though.

The base is part of a prepositioning scheme for rapid response to events by the U.S. Military.
All relieved now right? (wrong)

Paraguay earlier this month said they would revoke immunity for US Troops for war crimes in December (long story, not important), it wasn't unique to Paraguay and was the result of a US law concerning troop deployment. Bush signed the waver that allowed troops to be there without the immunity.
We're all starting to feel warm & fuzzy now right? (wrong)

Supposedly the contract for the site expires in December of this year.
Everything is ok then right?
Nope
The base is part of a larger long term plan as I said at the beginning.
It will probably be under a caretaker program and staffed by "Contractors" in a ready mothball status... and used for side projects.

And then there's this thing that keeps nagging me in the back of my head about fallout patterns and a global nuclear war, as I recall Paraguay comes out in the relatively "clean" status based on wind current and storm patterns.
And then I remember that Bush has 809 days in office and is proud that he invaded Iraq in a war that he feels no other President past or future would have the conviction to.
That G0d put him in office at this time to be an instrument of force.
Then I remember this guy has control of the worlds larges functional nuclear arsenal and I start looking into booking airline tickets to Paraguay in early November 2008 and realize that you can't book that far ahead - unless your name is Bush.

Wow, interesting information. I'm trying to control the conspiracy part of my brain but it's hard with GWB in office.

Great post! I might have to pass this on if you don't mind in the coming days.

Did you hear about Cheney shredding documents at his bunker (i mean house)?

yeah, the war pigs are a little worried that their whole war profiteering house of cards will come crashing down next week.

This is definitely a story to watch.