The final death nail for the GOP? 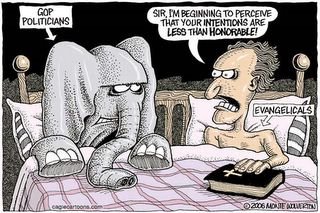 The White House denies the assertions made by a former
official in the faith-based-initiative program.

The former official also writes that the White House office of faith-based initiatives, which Bush promoted as a nonpolitical effort to support religious social service organizations, was told to host pre-election events designed to mobilize religious voters who would most likely favor Republican candidates.

The assertions by David Kuo, the former No. 2 official in the faith-based-initiatives program, have rattled Republican strategists already struggling to convince evangelical voters to turn out this fall for the GOP.

Some conservatives lamented Thursday that the book, "Tempting Faith: An Inside Story of Political Seduction," also comes in the midst of the scandal involving former Rep. Mark Foley's interest in male congressional pages, another threat to conservative turnout in competitive House and Senate races. The book is scheduled to hit stores Monday, but the White House responded to its assertions Thursday as excerpts began leaking out.

In the book, Kuo, who quit the White House in 2003, accuses Karl Rove's political staff of cynically hijacking the faith-based-initiatives idea for electoral gain. It assails Bush for failing to live up to his promises of boosting the role of religious organizations in delivering social services.

White House strategists "knew 'the nuts' were politically invaluable, but that was the extent of their usefulness," Kuo writes, according to the cable channel MSNBC, which obtained an advance copy.

"Sadly, the political affairs folks complained most often and most loudly about how boorish many politically involved Christians were. ... National Christian leaders received hugs and smiles in person and then were dismissed behind their backs and described as 'ridiculous' and 'out of control.' "

It is unclear whether Kuo identifies any specific official as using the dismissive language.

Kuo is scheduled to appear Sunday on CBS' "60 Minutes" program as part of a rollout arranged by his publisher, Simon & Schuster, which shares a corporate parent with CBS. Despite a publisher-enforced embargo, a copy of the book was purchased early at a Manhattan bookstore by a producer for MSNBC's "Countdown," a spokesman for the cable channel said. Program host Keith Olbermann began reading excerpts on his Wednesday show.

Gerson called Kuo's account "laughable," while Towey cited a December 2002 e-mail from Kuo expressing positive feelings about the program's progress in promoting "compassionate conservatism."He doesn't seem to have been working at the same White House where I worked," Towey said. "I had marching orders from the president to keep the faith-based initiative nonpolitical, and I did."

Still, neither Gerson nor Towey denied Kuo's assertion that politics did factor into the initiative.
Posted by Lizzy at 10/13/2006 11:44:00 AM

I love this story! Nothing will keep the Evangelicals home in November like the fact the White House secretly hates them.

I love this story, too. Let's just hope the Evangelicals believe what the book clearly states in black & white.

The White House doesn't just secretly hate the evangelicals, it hates all Americans, particularly those who don't agree with their hardline... this IS a great article! Good that this kind of news is coming out right about now! Let's get the evangelicals so totally disgusted they don't bother to come to the polls.