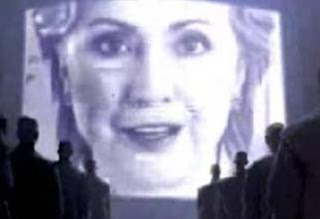 New Blogger sucks.
Ever since we had to update to the "new & improved" Blogger, I can't get videos to post on my blog. I get a big box, with a little red x instead. I'm also having spacing issues, as well as a few other problems that bug the crap out of me.
Eventually, I'm going to take this blog off Blogger and move it somewhere that isn't so buggy. I also have plans to redesign the interface because it's a little on the busy side (okay, more than a little.) I was hoping that I would learn how to do it in school, but that doesn't appear to be happening anytime soon.
The video I was itching to publish was featured on Countdown with Keith Olbermann tonight. Someone took Apple's legendary "1984" commercial and did something extremely creative with it. It is not an official campaign commercial, but it is very, very cool.
Yes, the campaign season is quite a ways away, but I bet you're like me in that it can't come soon enough. The sooner the season starts, the faster it will seem that the Bush years will finally be over.
Okay, enough about all that, watch this now... you won't regret it:
YouTube: Vote Different
Posted by Lizzy at 3/19/2007 11:36:00 PM

I missed the show tonight. But I put the ad up on my blog. Thank you for posting that. Hope you can work out your blogger issues. Maybe it's a conspiracy

I think it's really cool that the ad just came out of nowhere. It's nice to see you can participate in the campaign without necessarily having millions of bucks in your back pocket.

Yeah, I don't know what's going with my blog, wf. I noticed that no one else is having the video posting issue. I think it is a conspiracy.

J, I agree. Anyone with a laptop, decent software, and some geeky knowledge can put stuff like that out. It's a new Renaissance in politics, advertising, and more.

New Blogger it totally sucks, I've had to stop and start again and again just to add comments, and hell my pics seem to drop off the face of the earth sometimes!!!

The problem is that I never installed the new one, but now my profile links on comments don't work. Lists my profile as "unavailable" and implies I haven't made it public when it is clearly set as public in my settings. So you are screwed both ways.

Oh, and look, now I guess my pics aren't showing up either. I guess this is supposed to pressure me into installing what you guys are telling me is crappier than what I have.

I would have bet that it came out of the Clinton campaign.
But I would have been wrong.
In my opinion the piece was mediocre and unimaginative - but more I think it hurts both campaigns,