US is funding Al-Qaeda groups 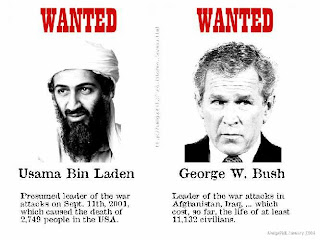 Nothing really surprises me anymore when it comes to the Bush administration, but I was taken aback by this one.

This story did get some play on cable news, but not in the mainstream media. If this story was reported like it should have been, maybe the general public would be demanding Bush's head, just like us.

We have now come full-circle on the war on terrorism.

New Yorker columnist Sy Hersh says the “single most explosive” element of his latest article involves an effort by the Bush administration to stem the growth of Shiite influence in the Middle East (specifically the Iranian government and Hezbollah in Lebanon) by funding violent Sunni groups.

Hersh says the U.S. has been “pumping money, a great deal of money, without congressional authority, without any congressional oversight” for covert operations in the Middle East where it wants to “stop the Shiite spread or the Shiite influence.” Hersh says these funds have ended up in the hands of “three Sunni jihadist groups” who are “connected to al Qaeda” but “want to take on Hezbollah.”

Hersh summed up his scoop in stark terms: “We are simply in a situation where this president is really taking his notion of executive privilege to the absolute limit here, running covert operations, using money that was not authorized by Congress, supporting groups indirectly that are involved with the same people that did 9/11.”

Hersh added, “All of this should be investigated by Congress, by the way, and I trust it will be. In my talking to membership — members there, they are very upset that they know nothing about this. And they have great many suspicions.”
Posted by Lizzy at 3/08/2007 05:40:00 PM

The Middle East is just one big, vicious circle. We supported Bin Laden and company in Afghanistan against the Russians and they repaid us with terrorism. Then we invaded Iraq, which helped Iran gain power and now we have to support Bin Laden's people again...

Yeah we were hearing whispers of that, weird but true my guess is that the state department is looking to play the long game (I'm saying state dept, because I'm guessing George has stepped back from micro managing anything to do with the middle east). My guess is that everyone can see a point within the next decade where Iran will push to far and every other Sunni dominated country pushes back. Guess thats where the slant funding of Al queada groups comes in, I think its someones idea of positioning for another proxy war.

Not surprising in the least, god bless Sy Hersh, he is the reason that I have a subscription to the New Yorker, his reporting is always amazing.

Yes it's really fucking pathetic but it's not surprising. In fact I bet some in the deep, dark crevices of our government are fully aware of the funding and are instrumental in getting Al Qaeda the funding it needs.

BushCo's style of government requires a Nation in Fear and a plethora of enemies.

Peoeple forget that Bin Laden worked for the CIA and that we funded the Mujahadeen's battle against the USSR. Rummy sold the WMD to Saddam. Reagan sold weapons to Iran to fund the Contras.

On another note Lizzy,

we are looking for bloggers who may be interested in doing a post on Mark Noonan and/or emailing him. He's the founder of Blogs for Bush who claims he's too old to join the military. He's a huge Bush Glorious War Cheerleader.

Anyway, he's 42...the army upped its enlistment age to 42 last year. He supports the war, he should fight it.

I wrote more about it here and here

Let me know if you email and/or post about it so I can include you on a running list of those who are on board.

Whoa... I didn't know about this one. Thanks for posting about it, Lizzy! It makes sense that our administration would be involved in junk such as this. With the way the revelations about Bu$hCo keep piling up daily, why aren't more Americans getting pissed off and trying to do something about it?

J, Yep. And so it goes, round and round we go. The famous quote: "Those Who Do Not Learn From History Are Doomed To Repeat It" comes to mind.

Damien, I think you've got that right. It's always good to get your take on things. Hey, are you back home yet?

elvez73, I agree. Sy Hersh is the best of the best. Didn't he also break the Abu Ghraib story?

Polishifter, Yes, it's more than pathetic and it has to stop. It begins and ends with impeaching the whole administration.

On your note about Mark Noonan, I commented on your blog. Feel free to do whatever you want with my remarks. I'll try to get my own post going about him this week.

You're welcome, Snave. You asked, why aren't more Americans getting pissed off enough to do anything about it? That's what I wanna know, as well. Too busy watching FauxNews, perhaps?

We are doing exactly what I have believed all along. Attemting to destabilize the region and create a civil war. We have done this many times over the years. This situation gets more appalling everyday. We did this in Viet Nam, Iran, Nicaragua, Africa. And probably other countries as well. Excelent post Lizzy