This was sent to me by a friend of mine. It's a great read, particularly when you get down to the paragraphs about what we can, and should, be doing to create a new revolution.

People have the power -- let's use it. 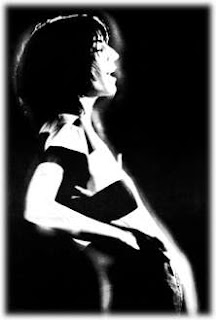 PATTI SMITH 2007: Alive, well, and…not looking that different than she did on the cover of Easter

We often fault our heroes a little too hard on their weaknesses, and come down even harder upon those heroes who try to get it together again and stay relevant in the modern world, often failing miserably in the process or becoming dreadfully out of touch. Nostalgia in any form is a crippling and blinding force which causes so much good art in so many forms to become nothing more than a fabrication of memories meant to rid our wallet of anything green while banking on your own wishes for the past to stay relevant to the future.

That being said, none of this applies to Patti Smith, who has little use for nostalgia ("Fuck CBGB's—start your own club. I said that in the 70's…it's just a room…what makes it cool is the energy, the people….") as her mind, body, and soul are planted firmly in 2007 and the modern world. Her recent induction into The Rock and Roll Hall of Fame notwithstanding, Patti Smith is not so much an old punk poetess but a survivor, a widow, a mother, a writer, a rebel, and by all means still a rocker, not to mention an opera fan. ("The last music I bought was Maria Callas, my favorite opera singer, an album of her Italian arias. My cat threw up on it, so I had to buy another copy.")

Addressing a question as to why there are no obscure selections on her new album of cover songs, Twelve (Columbia), due to be released April 24th on Columbia, she merely replied "all of my (own) records are obscure. This is not a record for me; this is a record for the people." Among the tracks, which Smith selected more for their lyrics than anything else ("something (for people) to think about and enjoy and make them think"), the album features Jimi Hendrix's "Are You Experienced?" Jefferson Airplane's "White Rabbit," Nirvana's "Smells Like Teen Spirit" ("I relate to the lyrics—I got an illumination about it"), and Tears For Fears' "Everybody Wants To Rule the World." Questioned about this last selection, Smith replied "I never in a million years thought I'd do a Tears For Fears cover, but I was buying coffee and thinking about how fucked up the world is, and then it came on and I heard 'everybody wants to rule the world' and I was like 'yeah'. That simple line, in one reference, says it all."

While the flat reading of the almost 60's style rhetoric from Smith may be rooted in, though not applying to, another time, be it environmental issues or the state of the music industry, Smith knows what the hell is going on, even if, at 60, she's not nearly as active as she once was, though by no means any less creative. "I don't want to be who I used to be; I'm not that person nor try to be nor could I be. I'm never going to have the adolescent power and sexuality that I did when I was younger. I'm not a shadow of my former myself, I'm an evolving person. I don't know if I'm relevant…being an artist, I'm never satisfied. I create work to satisfy myself, learn stuff, illuminate. I haven't even done my best work yet. It helps me to stay curious, agitated, working… I've still got work to do, I'm still working. I sit in my house writing poems, listening to opera, and I help when I can; I speak out against the Bush administration as often as I can. I'll just keep being a thorn in the side of the Bush administration. If you keep poking someone, they're eventually going to bleed."

In her iconic version of The Who's "My Generation" (released as the B-side of "Gloria" in 1976), Smith commandeered her audience and stated "I'm so young so goddamned young…we created it, let's take it over!" Abstractly, Smith is still singing this tune, though not just to her own generation, but to the younger ones as well. "Things are different now, across the board. It seems like new generations are promoting new ways to share work. I'm not really part of their world, it's internet based, but they have a community that's unprecedented. (They) have more tools for unification than any other time in human history. My immediate reaction (to the internet culture) was this isn't any good because it is so isolating. They could be very empowered and not just wackin' off on their computer."

"In a perfect world, these folks would unite and do something really revolutionary: create the biggest environmental movement ever seen, unite and save our fuckin' planet, unite and make change, a new political party. Topple the government and start a new government. How to do it? Read Ralph Nader's books. There's a whole new revolution, but they don't even know (they're) a revolution. They could be a force that has never been seen before. I'd like to see new generations create a new party; pragmatic, unified, and have guts. Republicans are evil, Democrats have moved to the center and are weak."

"The number one issue is our environment, not just global warming, but colony collapse, extinction. If people could look at this as a challenge, not as depressing, these things can be done. We can topple the government, be vigilant and make positive change, to accept what other people are doing to destroy the environment. True destruction of the environment is not a process of evolution, it is a product of greed. China's factories have polluted the air so bad their rivers are black. Something is gonna happen, it just can't stay like this."

Proving herself far more relevant and, though she disagrees, more plugged in than many of her contemporaries, one needs not look any further than her awesome performance at the The Rock and Roll Hall Of Fame induction ceremony last Monday, March 12, 2007. Performing three songs: "Because The Night," her cover of The Rolling Stones' "Gimme Shelter," and, by her late mother's request, the still sharp "Rock And Roll Nigger." "My mom was the main person in the world who wanted to see me in The Rock And Roll Hall of Fame. Before my mom died, literally the day before she died, (she asked) if I ever made it, please sing a certain song for her."

But Smith acknowledges that she isn't 100% on the idea, concept, and actual existence of this kind of Hall of Fame. "Before there was one, I felt there shouldn't be one. Rock and roll…it's open territory. MTV Awards are a complete betrayal of our culture, they're stupid and fucked up. I'd be lying if I said I wasn't proud, but it is true I lobbied against (the Hall of Fame). I don't see myself as contradictory. My kids are proud of it, my parents were, and in some ways it's an honor, (but) The Rock And Roll Hall of Fame is a man made institution, and rock and roll will live beyond The Rock And Roll Hall of Fame. Rock and roll belongs to the people."

As for where she sees herself for the rest of 2007, Smith simply answered "touring touring touring." Continuing to join her on guitar is her son, Jackson Smith, whose father was the late, great Fred "Sonic" Smith, guitarist of the MC5 and Sonic's Rendezvous Band. "Jackson…has new energy like his Dad, has his blood, (though) he's slammin' more towards country." In terms of eradicating nostalgia, though, that may not be such a bad thing at all.

Wrapping up the interview, Smith was thankful that no questions were asked about her personal life. When the response was that that is her business and her business alone, she simply replied "yeah, it's not so great anyways."

Rock on, Patti Smith, rock on.

I love Patti, she and REM were the only cool things at this years Hall of Fame induction, she did a great medley of songs and she sounded great. I do like her opinion in that article about nostalgia, something we should all take to heart.

Patti's so cool. I saw her at a little club in Eugene right after Easter came out and she had the audience throw the chairs off the floor so people could dance.

In August 2004 (I think maybe the same day you and I ever communicated via blog) I went to a signing she did here in Seattle. She autographed a copy of "Horses" for me.

"Republicans are evil, Democrats have moved to the center and are weak."

Patti is very cool, and very wise. I wish I had seen her getting inducted into the Hall of Fame, elvez73.

Wow, August 2004 is the first time we've ever communicated, J? It seems so long ago. I would cherish that autographed copy of "Horses."

Yep, she nailed it, Polishifter.

I had the pleasure of watching her perform in 1996 at The Gorge. She was the warm-up act for Neil Young but practically stole the show. I have never seen any performance as powerful and sensual, so full of excitement. Lenny Kaye and Tom Verlaine were part of the band... it was just ecstasy. I found myself getting sexually excited as I watched her writhe around the mic stand and put every ounce of herself into her performance. One of the best shows I have EVER seen.

So, what you're saying is that you became engorged at The Gorge? : )

A Patti/Neil show would have done the same thing to me.

I saw Patti at the Unicorn in D.C. back in '76.
I wouldn't take political advice based on that performance - but people change and art and politics aren't natural companions like we've been sold them as.

I think music can change minds. We have yet to hear a true breakout protest song, but there were plenty of them in the 60's, and they did have an impact.

Neil Young, Green Day, The Stones, and even Pink have written some lately, but we still don't have our "Ohio," "For What It's Worth," "Give Peace a Chance," or "I Feel Like I'm Fixin' to Die."

Have we forgotten about Revolution people? Come on now!!! Its the Beatles!

"American Idiot" is great, and one of my favorites. That one ranks way up there.