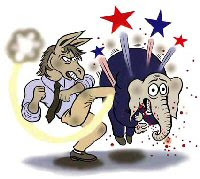 I went to the bar last night to meet up with some old friends, and let off a little steam.
Being that my friends are lefties, the conversation eventually shifted to politics, but there was a guy sitting at the table that I didn't know. Since I didn't want to assume he was a Dem, I asked him what his affiliation was. He said that he swings toward the Republican side.
When I said, wow, you admit that? He gave me a puzzled look. So, I said, aren't you ashamed of what your party has become in the last 6 years? He said, what do you mean?
I had a couple drinks in me, so I wasn't completely on the ball, but I did say, in the last 6 years, Bush has ruined our standing in the world and has fucked everything up.
He said, that started long before Bush, or something to that effect. Feeling my ire rising, I looked to my friend, Brian for some backup. He asked the guy if he reads. He said, no, not like I used to. That was enough for Brian. He didn't need to hear anymore. I should have taken his cue.
I, on the other hand, sat there for a while and tried to engage him, but it was pointless. I did say, isn't it amazing how divided we've become in the last 6 years? He said, again, that started long before Bush. (Sure, the division may have started with Reagan, but it's nothing like it is now.)
Now that it's the next morning, I'm thinking of all of the things I should've said. However, if I had been thinking more clearly, it could have gotten very ugly, very fast, so it was probably for the best.
Posted by Lizzy at 3/18/2007 11:04:00 AM

Booze and politics don't mix. Unless of course, you're the one sober person at the table. Then it's a hoot.

Years ago I was asked to provide a group of executives at the mega corporation a full report on the project I was running.
I arrived loaded for bear and ready to roll.
They didn't listen during the report and did not look at the printed material that I had spent a week preparing for them.
At the end of the presentation the told me they had decided to shut the project down - before - the meeting.
I thanked them for the time to present the facts and the data and told them I would shut it down.
On the way out my boss told me he was very pleased with my professionalism and that I hadn't gone on the attack as he would have.
My response was that it does no good to tell a moron that they are a moron.
The look on his face was priceless.
The project was valuable, useful, productive and virtually without cost.
So by moron logic it had to be shut down.
By real logic, there was no point in arguing with the morons in charge - who's minds were already made up.

I know, kvatch, but sometimes it's hard to resist, especially when you are around people that you assume are on the same page.

1138, That is a great story. A lot of wisdom there. I know I shouldn't bother arguing with some people, but like I said to kvatch, it's hard not to at times. If some ignoramus is droning on & on, I can't always bite my tongue. Ya know what I mean?

Lizzy, you didn't mention that he also was handiing out CD's on "Understanding The Eucharist".

Brian,
Yes, he was! How could I forget that?!! It was the cherry on top.

When Tom handed me the discs that the guy gave to him, I quickly "filed" them in the nearest trash can.

"Prols" as in proletariats, perhaps?

Indeed. Bad idea to talk politics when lubricated and best to avoid debating strangers. Same goes both ways for religion.

I think you know better, but by your own addmission, you simply can't help yourself sometimes which is surprising, smart as you are...

Thanks for the sideways compliment, Davidovich.

Being smart doesn't necessarily mean that you always do the right thing. Common sense often flies out the window while drinking. Ya know what I mean?

Get em to google ya, then of course slap him upside the head, what the hell is he thinking.