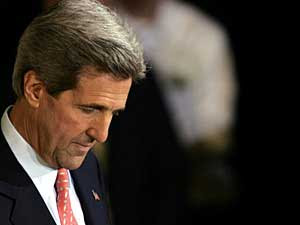 Here's yet another story not being reported by the mainstream media:

CLEVELAND (AP) - Two county election workers were sentenced Tuesday to 18 months in prison for rigging a recount of 2004 presidential election ballots so they could avoid a longer, detailed review.

Jacqueline Maiden, 60, a Cuyahoga County election coordinator who was the board's third-highest ranking employee, and ballot manager Kathleen Dreamer, 40, each were convicted of a felony count of negligent misconduct of an elections employee.

"I can't help but feel there's more to this story,'' Corrigan said.

It figures that a story like this would have to come from a British news source. (Or someplace outside of the U.S.) Our "liberal" media is way too careful not to upset Bush or the Powers That Be.

Remember when Kerry failed us by refusing to contest the result?

Kerry let us down BIG TIME.

He ammassed this huge stash of cash and didn't even spend it on the campaign let along fighting the recount battle.

I'm not even over the 2000 election. Thanks for sharing that, Lizzy!

Tom, I know. It's sad that we have to look to the British, and others, to get the full spectrum of news. It reminds me of the commercial for "The Nation" magazine. Their tagline is "famous for that liberal media bias that you can't get anywhere else."

1138 & Polishifter, I agree. I'll never forgive Kerry for not contesting the election, and I am very glad that he's not running again.

Sheryl, Me neither. You're welcome!

Now someone needs to look into the Florida balloting & elections. This was a travesty of justice as well...Let's see...Humm, maybe, Jeb, and his cohorts.

Doubtful that it would ever happen, but you never know.

It's funny that I have to learn about this from one of my blog buddies and not the MM, Kerry not spending the last millions in his coffers and not contesting in 04 pissed me off, that was when I realized that the ticket should have had John Edwards at the top, he would have fought the GOP shennangins in Ohio. I'm still pissed like ya'll about 2000 as well, I can't friggin let it go.

Once again, everyone is missing the real issue. We need to be focused on bringing down the Federal Reserve, thus taking the power from the hands of the World Bankers...who have left Congress castrated and impotent. Nothing will change for the better until this happens. And of course our 2-party monopoly system has diverted attention from the real issues by keeping the people in the mind-set that it really matters who's in office. Have you heard ANY Democrat pondering the significance of Haliburton relocating their corporate offices to Dubai? Of course not, because "corporatism" is not partial to party line, and has been part of every administration since at least Eisenhower (who was the first to talk about the "military-industrial complex"). Mussolini was the the person who said "corporatism" was actually a better word than "facism" for the type of government he fancied. America continues to move a step closer each day to the same fancy.

I'm sure they are looking into Florida's mess of an election, Tommy, but whether or not anything will come out of it is another story.

elvez, I don't think the John Edwards of 2004 would have fought the election results, but I do think the new & improved Edwards would. He found his balls in the last couple of years.

I know the fix is in, Brian (brdrake), but the big question is, what are we gonna do about it?

1138, ...and they're still doing nothing. I hate to call myself a Dem sometimes because the Dems in charge are a bunch of pussies.

Lizzy sometimes it's like choosing between a punk holding up the 711 and a man who exterminated millions of Jews, Poles, Homosexuals and Gypsies.
Heavens know I don't want the punk with the gun - but I wouldn't empower a monster like Hitler to just to be rid of a petty crook.
Sometime the Dems are like that petty crook - but almost always the Republicans are like that other guy.

Been away from the keyboard for a couple days or I would have responded sooner. I will say it again, we are now at a point where it really doesn't matter...in a two-party system...who wins the elections. THAT is the point 1138. Who said anything about Corporate Facism? I didn't use that term. I'm not even sure what that means. You have missed it completely. Things are not as simple as "good guys" vs "bad guys". And the analogy of the punk with a gun, and Adolph Hitler is absurd. How about this: You have the Genovese Family on one side, and the Gambino Family on the other side. They both have a "code of honor" they live by. They both feel justified in their actions. They both believe in GOD. And, they both believe they are righteous. To the rest of us...THEY ARE THE MOB. And the REAL authority is somewhere in Italy. As soon as we get away from the fantasy of one-party-better-than-the-other-party...and come to grips with the reality of where change really needs to happen, I truly believe we can turn things around. Unfortunately I'm afraid things will have to get a whole lot worse before the needed majority will wake up and smell the sulphur. In the meantime, let your elected leaders know how you feel about the Fed, the National I.D. Card, et al. You have to start somewhere. Doing a circle jerk with the choir ain't gonna change shit. Sorry folks.

Geez, I didn't know about this either until reading it here, Lizzy. Thanks for posting...

I agree with Polishifter: thank God Kerry is not running in 2008.