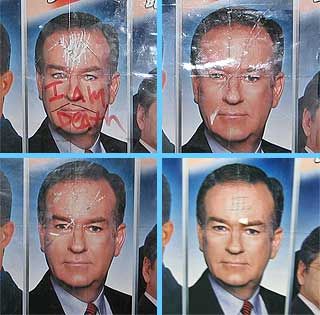 Blog friend, J. Marquis of Major Conflict fame, wrote a great post on the awakening of the American public. Here is more proof of his correct assessment:

Slackers at Fox News Channel, you’re on notice! Your boss is not pleased. Fox News Chairman Roger Ailes is on the warpath following his network’s recent ratings slump, and he won’t hesitate to clean house to turn things around.

So far during the second quarter, the No. 1 cable news channel’s primetime schedule has dropped 22% in its core 25-54 demo and 8% in total viewers. The first quarter was even worse. […]

Insiders say that, even though Fox News remains No. 1, Ailes is fuming over the complacency he senses among staffers.

Production values are slipping, and bookers aren’t competitive enough, relying too heavily on the same pool of faces and settling for authors or actors after they’ve already been on CNN or … gasp … MSNBC.

For that matter, as Singer added, MSNBC’s Keith Olbermann is “edging ever closer to Fox News’ big star, Bill O’Reilly, among the much-coveted 25-54 demographic.”

Re. Olbermann's continued rise in popularity, Austin Powers might say, "YEAH BABY YEAH!!!" I know that's what I say, anyway.

FOX "News" needs to continue its downward trend. Such a trend would only continue to bode well for our country!

Thanks for the sunshine!!!

Live by the lie, die by the lie. It's so much fun watching them desperately try to spin the war news.

Thanks for the nice reference, by the way!

It's a Deep Pocket fight though.

Fox can drop in viewership and likely still keep their advertising. Many corps like to addy with Fox News because they agree with their message. Hell, they'd go as far as to carry Fox News much in the same way the addys carry Limbaugh through Clear Water.

We strike will the iron is hot and push for a full blown Boycott of Fox News.

Well if it gets bad enough they can always invite V.P.Dick back for a canned Fox hunt. Aye?

The tide of public opinion has changed, I've noticed that some people that I know what don't remember that they told me that they voted for fear are now pretending they didn't.

Fox #1?
Who's counting the total, Diebold?

"Live by the lie, die by the lie" - I like that, J. Maybe FOX should use that as their new slogan. "Fair & Balanced" isn't working out so well for them.

Polishifter, FauxNews boycott? Yes. Most definitely. Personally, that channel isn't allowed to be on in my home. I know you're supposed to keep your enemies close, but I can't stomach that channel.

1138, You're right - it does sound like Diebold had their hand in some of those ratings numbers.