Use the power of the purse by Russ Feingold 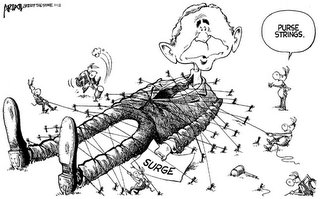 Keeping our brave troops in Iraq indefinitely is having a devastating impact on our national security and military readiness.

That's why I have consistently advocated that we set a timetable to redeploy our troops from Iraq. But the president refuses to set a timetable, even though the American people soundly rejected his Iraq policy in November. Instead, the president has announced he wants to send approximately 20,000 more troops.

We should be redeploying our troops out of Iraq, not sending in more.

Conditions in Iraq are deteriorating, the strain on our military is increasing and the threats we face to our national security elsewhere in the world continue to grow. We can't afford to wait any longer. Congress must use its main power - the power of the purse - to put an end to our involvement in the war in Iraq.

Over the next several weeks, I am going to take a hard look at just how we should do that in my capacity as a member of the Foreign Relations and Intelligence committees, both of which will be holding hearings on Iraq.

As the president made clear Wednesday night, he has no intention of redeploying our troops from Iraq. Congress cannot continue to accept this. Congress can, by restricting funding for this misguided war, do what the president refuses to do - redeploy from Iraq to refocus on defeating global terrorist networks.

Congress will continue to give our troops the resources and support they need, but by, for example, specifying a time after which funding for the war would end, it can give the president the time needed to redeploy troops safely from Iraq.

Our troops in Iraq have done their job professionally and heroically. But we cannot continue to send our nation's best into a war that was started - and is still maintained - on false pretenses. An indefinite presence of U.S. military personnel in Iraq will not fix that country's political problems. And sending more troops will not provide the stability that can only come from a political agreement.

Our country needs a new national security strategy that starts with a redeployment from Iraq so we can focus on the global threats to our national security that have only grown while this administration has been bogged down in that country.

We need to finish the job in Afghanistan and address threats to our security in Somalia and other weak or failed states that we have neglected for too long. We should scrap the failed diplomacy the administration has used to offend, push away and ultimately alienate so many of our friends and allies, while we also repair and infuse new capabilities and strength into our armed forces.

Keeping massive numbers of American troops in Iraq indefinitely is not the way to defeat global terrorist networks. We will continue to weaken, not strengthen, our national security by continuing to pour a disproportionate level of our military and intelligence and fiscal resources into Iraq.

In the November elections, the American people made it clear that they want our troops out of Iraq, and it is up to Congress to respond. Our top national security priority must be to defeat the global terrorist networks operating in countries around the world. With Wednesday's announcement that he seeks to escalate the Iraq war, the president made it clear that he will continue to shortchange that global fight and to ignore the will of the American people.

From the beginning, this war has been a mistake, and the policies that have carried it out have been a failure. Congress must not allow the president to continue or escalate a war that has already come at such a terrible cost.

It's time for Congress to use the power of the purse to end this devastating war and finally bring American troops out of Iraq.

We need to set a date to have our troops out. That's the only thing that will get the Iraqi government moving. Period.

Good point, Major. The Iraqis have heard our leaders say so many things and basically brag about how easy things were going to be, and our guys continue to say one thing and do another.

At this point they might think "Yeah, right, SURE they will remove their troops! Heh! Their troops will be here for years, even if they say they're sending them home next month..." But yes, setting a date is probably about the only way to get them to even consider stepping up their efforts.

Using the power of the purse, along with setting a timetable for withdrawal = exit strategy.

There's just one problem here. in the 1980s when the Congress cut off funding for American involvement in Nicaragua Reagen and his crowd gave us Iran Contra. In other words, when legal funding didn't work they found an illeghal way to fund their death squads. Bush makes the Reagen Administration look lawabding and compassionate. I have no doubt that he would break laws and lie left and right in has mad plan to kill more American soldiers.

That said I think we need to do something. Cutting off the funding for the surge is as good a place as any to begin, but I'm beginning to think that we need the kind of political movement that began in Poland in the late 1970s and early 1980s and which eventually led to the downfall of the Soviet Union--an Evil Empire that we looked at for so long that we eventually began to emulate.