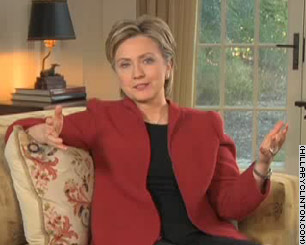 "And I'm in to win," she added in a statement, announcing she has set up an exploratory committee that can gauge opinions and raise money for a presidential campaign.

From Lizzy:
I must admit, even though there was no doubt that she was going to run, I am disappointed. Hillary may be a smart, good woman, but I don't want her to be our candidate.

But, we must be careful, my fellow lefties. Hillary divides our party, and that cannot be. We're finally coming together and we cannot let anything or anyone loosen the binds.

That being said, Hillary doesn't get a free pass from my rants, but I'll try to tone it down. Ultimately, if she's our candidate, she will have my support. However, in the meantime, I will do all I can to make sure Obama, Edwards, or maybe even Kucinich, is the one.
Posted by Lizzy at 1/20/2007 10:05:00 AM

I totally agree. If she ends up being the candidate, I'll support her. I just really don't see it happening.

However, I want to hear what direction she would take the country in. Who knows, she might
surprise us.

I agree with your post entirely Lizzie. I sincerely like Hillary and I think she is a fine Senator, but her refusal to recant on her war vote and her reliance on polls is a big minus to me. Until Al gets in (please please) Edwards and Obama are my guys, and like you I hope she doesn't divide the party because you are right that we need to put up a united front against the GOP.

I also agree with your comments, Lizzy. I think she is entirely divisive, not just to the party but to the entire country. While she might claim to be a uniter, I just don't believe it is likely to happen.

Nominating her would be a sure way to divide the Democratic party and unite the Republicans. That probably isn't a very good recipe for getting the White House away from the GOP in 2008. The evangelicals who might otherwise be so disgusted they wouldn't come out to vote would probably just about ALL show up to vote against her, even if guys like James Dobson are saying he won't support McCain under any circumstances...

Better to have someone like Obama who people from the Republicans might be able to support, than someone who they all hate on general principle. The fact that nobody knows much about him is an advantage for him... he is an unknown quantity, and if he is a relatively blank slate, there might not be as many prejudices against him, politically speaking, as there surely are against Hillary. As much as she might try to reach out, I don't think she would convince too many rightwingers that she is anything but a Clinton. Sigh...

And I think that's sad, because I think she might be able to do a pretty decent job... if she could win. I will support her if she buys the nomination, but I just don't think it will happen.

I won't support her even if she buys the nomination.
I'll say so right up front - the more of us that do, the less damage she can do.
I wouldn't consider the Reeper candidate either, the one person in that camp that might have gotten a glance went sour.
So, I guess for the first time I'd have to give someone outside the two party's a look.

If Mrs. Clinton gets the nomination it just might cause a sea change in politics the nation hasn't seen in probably close to a hundred years away from the existing status quo.
There isn't a Republican out there that really inspires the nation either.

I think Hilary does a disservice to the Democratic Party and the Nation by running.

If she ends up being the nominee I will vote for her.

Limbaugh's head is probably exploding. He got his wish.

My problem with Hilary is that she is too calculating. She plays exactly to the center. What the hell has she said on the Iraq War? Not much until recently. Surely she does not support an immediate redeployment but prefers the Friedman method of punting it down the road another 6 months.

She's also a DLC Democrat in the pocket of big corp. She took money from Ruppert Murdoch which makes me a little nervous.

IF she becomes President though, I have no doubt that it will be a huge step UP from GW Bush.

If Hillary wins the nomination, I will vote for a third party! Not only did she back away from her vote on the war in Iraq (making her an easy target for the Republican candidates taunts of "flip-flop"), but she won't take a military strike against Iran off the table either. She is deep in the pockets of AIPAC and actually stood behind Israel's bombing of Lebanon (which killed civilians) this past summer. We need a cnadidate that will put America first, not make it second to a country that has no regard for international law.

Don't you hate when you comment on your own, or someone else's blog, and then the comment goes *poof* into thin air? That just happened to me, so let me try this again...

The Hillary vote is a tough call. On one side of the equation, (if she's the nominee), voting for her would mean voting against your own convictions. On the flipside, you can stand your ground and take a huge chance with a third-party nominee.

With everything I know, everything you guys have said, as well as a recent letter I read by a Gold Star mom, I'm much more inclined to go with a third-party candidate.

I'm sick of voting for the lesser of two evils. It's time to vote for someone who truly represents us.

Thankfully, we still have a lot of time between now and the next election. Even with all of her money, I don't think she will be able to buy the nomination. Her hawkish stance on the war may be her undoing...let's hope so.

PS. I will be posting the letter from the Gold Star mom I spoke of, sometime tomorrow.

Yeah I'll stay firmly on the fence until she says more, hmmm.