Redeploying Our Troops Out of Iraq 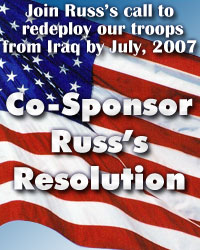 According to the latest news reports, in the coming days the President will address the nation about his intentions regarding the situation in Iraq. While the President ought to set forth a timetable to redeploy our troops out of Iraq as soon as possible, all signs point to a repackaged version of "stay the course," possibly with an increased U.S. presence on the ground. That strategy simply doesn’t make sense. Our open-ended presence there only fuels the insurgency, and adding more troops with no end date in sight only adds more fuel to the fire.

Thanks to each and every one of you, starting today, Democrats now control Congress – and now is the time for us to lead. There is no higher foreign policy priority than making America safer and getting our nation back on track by redeploying our troops out of Iraq.

Co-Sponsor the Resolution to Redeploy Our Troops Out of Iraq

It has been almost two months since Americans went to the polls and rejected the President’s strategy in Iraq. Since then I've continued the fight we started in August 2005 when we were alone in demanding a timetable for withdrawal from Iraq. Today, in this new Democratic Congress, I have introduced legislation that would require the redeployment of U.S. troops from Iraq within six months.

The administration has repeatedly ignored recommendations for a timely redeployment of our forces currently fighting in Iraq. But it's reckless to continue to devote so much of our resources to one nation while ignoring the growing threats we face elsewhere in the world. It is now time for Congress to work toward redeployment. I'm asking for citizen co-sponsors from all 50 states to join my call for redeployment.

I know the Progressive Patriots Community has always been by my side and I hope you’ll continue to work with me on this extremely important issue.

I will continue to work for a sensible foreign policy that refocuses our efforts from Iraq in order to continue the global fight against terrorist networks. Please co-sponsor my resolution to help send the message that we can't afford to wait any longer. It's time for Congress to take the necessary steps to fix our Iraq policy immediately.

I know he said he won't run for prez but I kind of hope he does.

Love the way wingnuts are painting Obama out to be a coke head.

How quickly everyone forgets that Bush was a coke head who had multiple DUI's. But we were all supposed to forgive him 'cause he's a good Christian.

I know. Russ should definitely reconsider. I don't think he realizes how many people are behind him.

The wingnuts are completely insane. On a talk show, Obama said that he used to smoke pot in his youth, as we all did (and inhaled!) The right has turned that into him being a cokehead.

I know we are all (right & left) supposed to get along now, but I can't when I hear shit like this. Fuck 'em!

The wingnutters are calling Obama a "cokehead"? Oh well, I guess Obama is black, and so is Marion Barry, and Barry was a cokehead and so was Richard Pryor, so if A then B? How else do they arrive at such a conclusion? Or maybe by thinking marijuana is truly a "gateway drug", kind of like the old "mother's milk leads to harder stuff" thing? What will they say if the "cokehead thing doesn't work... that Obama is on meth? ARRRRRGH, I would go and pull out some hair right now except my hair is only about 1/4 inch long and I can't grab it.

My guess is that they are doing the usual Republican thing, that is, tarring their opponents by accusing them of the very things of which the GOP knows it itself is guilty. Bunch of shit heads. And in the continuing spirit of Karlrovianism, they don't just want to smear their opponent, they want to ruin him. I don't think they would be saying things like that about Obama unless they were very, very afraid of him.

I agree, Lizzy... I would like to be able to get along with the Republicans, but unless they "change the tone" in a genuinely positive way, I just can't bring myself to support working with them on much of anything. The chances of them changing their tune? Unless they police themselves a bit better, I think that chance is almost zilch. So yes, fuck 'em. And let some aggressive investigations begin!!!