Here's something I never thought I'd say:

Norm Coleman, I'm proud of you. 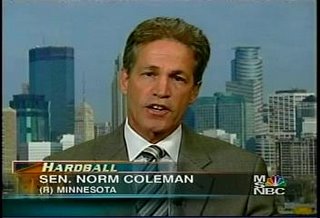 WASHINGTON - Sen. Norm Coleman took to the Senate floor Wednesday to raise his objection to President Bush's plan to send more troops to Iraq, arguing that an escalation of U.S. forces isn't the answer to the violence in Iraq.

"A troop surge in Baghdad would put more American troops at risk to address a problem that is not a military problem," said Coleman, a Minnesota Republican and White House ally. "That will put American soldiers in the cross-hairs of sectarian violence, create more targets. I just don't believe this makes sense."

President Bush will deliver a prime-time speech Wednesday night, in which he is expected to announce he's sending 21,500 more Americans to Iraq. Coleman, who visited Iraq last month, has previously announced his opposition to this approach, but he elaborated in his Senate speech Wednesday.

Coleman said the U.S. is fighting two fronts in Iraq: against terrorists, and in the war between Shiite and Sunni Muslims.

"Our military must continue the battle against extremists and terrorists, but we have no business being caught in the cross-fires of an Iraqi sectarian conflict," he said. "... The only long-term solution for bringing stability to Iraq must be centered on national reconciliation."

That's up to the Iraqi government, Coleman said.

"I refuse to put more American lives on the line in Baghdad without being assured that the Iraqis themselves are willing to do what they need to do to end the violence of Iraqi against Iraqi," he said. "If Iraq is to fulfill its role as a sovereign and democratic state, it must start acting like one."

An increase in troops ignores the conditions on the ground, said Coleman.

"My consultations with both military and Iraqi political leaders confirms that an increase of troops in areas plagued by sectarian violence will not solve the problem of sectarian hatred," he said.

Coleman stressed that the U.S. must succeed in Iraq.

"It is easy to lose sight of the fact that we are in Iraq as part of a global war on terror," he said.

"There is no question that Iraq has become the key battleground of this war. Failure cannot be an option in either the overall war on terror, or in Iraq."

A failed state in Iraq, Coleman said, would create a breeding ground for terrorists.

Poor Dumbya, given what might well be a Christ complex on his part, probably views this as his hour in Gethsemane...

"A failed state in Iraq, Coleman said, would create a breeding ground for terrorists."

As did the U.S. invasion of Iraq. Thanks, Dumbya.

"The White House had no immediate comment on Coleman's speech."

And given the White House stance on Congress, they probably didn't care enough to pay attention to Coleman's opinion.

Bush is going to go ahead and do what he wants to do for as long as he can, but it IS good to see a person such as Norm Coleman demonstrate that he does have at least a few functioning brain cells.

I won't give Bush any kudos for admitting in tonight's presidential address that mistakes have been made. I would only give him kudos if he admitted it was a mistake to invade Iraq in the first place.

Being that Coleman has been a lapdog for this admin, I'm not sure what his motivation was for saying what he said. Whether he's finally being truthful, or he's worried about losing his seat in the '08 election, I'm going to give him the benefit of the doubt. It took him a very long time, but like the rest of the general public, Norm's coming to his senses.

I'm completely with you, Snave. Bush admitting that he made a massive mistake in the first place would be huge. Too bad that's never going to happen.

Its senseless, why does'nt 43 just admit he's failed and leave it a that - no need to send thousands of young folk to die for his mistake!!!

This woman wrote this letter into the LA Times today with a plan - bring 1,000 Iraqi soldiers over here for three month intensive training and then send them back. Meanwhile, bring home a few thousand of our guys. I kind of liked that.