I think of myself as very well read when it comes our government and politics. I read the mainstream press, foreign news sites, as well as a lot of fringe news sources. I thought I was aware of most of what was going in the world, until I saw this film. 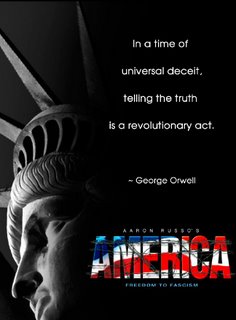 Tom & I's friend, Brian, came across the documentary, "America: Freedom To Fascism" while researching some other things on the web. I saw Brian and his girlfriend, Bekkah, after they watched the DVD and they seemed visibly upset by it. They brought the film over to the house so they could get my take on it. It had the same affect on me.

This is a documentary every American must see. It doesn't matter where you stand politically. This is for all of us. It's the scariest shit I've ever seen.

I will never look at what is happening in this country, and the world, through the same eyes again.

Film synopsis:
Determined to find the law that requires American citizens to pay income tax, producer Aaron Russo ("The Rose," "Trading Places") set out on a journey to find the evidence. This film which is neither left, nor right-wing is a startling examination of government. It exposes the systematic erosion of civil liberties in America since 1913 when the Federal Reserve system was fraudulently created. Through interviews with U.S. Congressmen, a former IRS Commissioner, former IRS and FBI agents and tax attorneys and authors, Russo connects the dots between money creation, federal income tax, and the national identity card which becomes law in May 2008. This ID card will use Radio Frequency Identification (RFID) chips which are essentially homing devices used to track people. This film shows in great detail and undeniable facts that America is moving headlong into a fascist police state. Wake up!


Before anyone out there passes this film/filmmaker off as some kind of conspiracy-laden crap, let me just tell you that it isn't. The people he interviews in the film are the real deal.

Are you aware by May of 2008 the law will require you to carry a national identification card?

Are you aware that there are plans being developed to have all Americans embedded with a Radio Frequency Identification (RFID) computer chip under their skin so they can be tracked wherever they go?

Are you aware the Supreme Court has ruled that the government has no authority to impose a direct unapportioned tax on the labor of the American people, and the 16th Amendment does not give the government that power?

Are you aware that computer voting machines can be rigged and there is no way to ensure that vote is counted? (Yes, that one I did know.)

This film could literally start a revolution, however it's primary objective is this:


Stop the polarization of America

Shut down the Federal Reserve system

Return America's gold to Fort Knox and have it audited

Have Congress and the IRS, in a public forum, reveal the law that requires Americans to pay a direct, unapportioned tax on their labor.

Make it illegal to implant RFID chips in human beings

Put an end to the Patriot Act

Sign up millions of Americans so we can accomplish our objectives

To check out the trailer/website and order the DVD:

YouTube also has clips, as well as the whole film, on their site.

I would like to make copies and send them to you, my blogger friends, but I want to look into the legalities first. If you don't want to watch it online, or buy it, let me know, and I'll see what I can do.

You must see this film.

Creepy and scary. Last month's Wired had instructions on how to disable those radio frequency tags without destroying the card. I must find that issue and make sure I save it.

I must be living in a cave, I had no idea that a national id scheme had gone through. I would love to see computer voting outlawed, I have to see this film.

Sounds like a great film, the kind of thing that ties together lots of separate facts that we've all heard here and there.

This isn't one of those lame tinfoil hat jokes, but I read that if you wrap that ID card in tinfoil it will jam the frequency and keep them from tracking you. Not exactly a solution (if it's even true), but I thought I'd pass it on.

All I can say is welcome to my world.
It's why my blog was called Liberty Lost.

You might also want to take a look at this.

Yes, this is super-creepy stuff. You guys have to see this film.

When I watch the news now, I see it in a whole different light. Remember when Bush 41 used to talk about a New World Order? It's happening now. They don't care how many people are hurt or killed in the process. We're all just chattel to the powers that be.