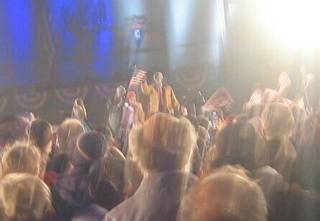 Has Minnesota become a lot more conservative the past few years? I saw that Norm Coleman on tv a while back and he sounded like some right-wing yahoo from the South...

They say that MN is becoming more conservative, but I'm not sure if I believe it or not. From what I see around here, Kerry has way more support.

Good old Norm Coleman - talk about a REAL flip-flopper! He went from a Democrat, that in his day was a roadie, went to Woodstock, and protested the Vietnam war. Fast forward to 1996, & he becomes a Republican. Now he lives so far up Bush's ass that he is a mere shell of his former self.

I don't know what the Republican's are doing, but it looks like they now have their claws on St. Paul Mayor, Randy Kelly. A Democrat for Bush. Could they be drugging them...or maybe shock treatment...lobotomy?