In case you had any doubt 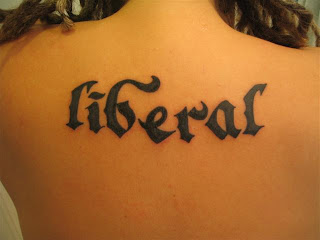 I guess you could say that my motto is, Go big, or go home.

Nice! One of the few tats I've seen that's worth having.

I was a little concerned about branding myself, but with everything I have out there on the Internets, I'm already screwed (for when it comes time to round us up.)

I've never wanted a tattoo...
Until I saw that.
Now you've got me really really tempted.

Wow - gorgeous! But, where are you gonna put the big scarlet "A" (for atheist)? :)
btw, you can get the scarlet letter t-shirts from American Atheists and (I think) the Richard Dawkins Institute.

Wow. You know, I have enough trouble focusing, and you just ruined me for at least a day. So nicely done, in such a nice place. *sigh*

I was thinking of getting a salmon tattooed on my back between my shoulder blades, but now I may have to get one of a kicking, laughing donkey.

You're right, with all the leftist stuff we have out there already, what do we have to lose?

Candace, I will be getting one of those t-shirts. Thanks for the tip, and the props on my new tat.

jollyroger, that was such a sweet thing to say (I'm blushing)

Thanks, Snave! I thought about the Dem donkey logo, but you never know. Someday I may leave that party -- but I'll always be a liberal. A Green liberal, perhaps?

You've made Blackwater's job much easier when they start vetting neighborhoods.

On the other hand,

When the revolution starts to clense America of the BushCo NeoCon Republicans you will be easilty spotted as a freedom fighter.

All of this presumes you either go topless all the time, where backless dresses, or those front strap shirt thingies.

I guess if I hear that Blackwater is on the way, I could have my tattooist draw a line thru my tattoo...but I like your Freedom Fighter idea much better.

Lizzy I really do like the tat! Just gotta say "esse you so loco girl". And I mean that will all my heart.

Thanks, Keira. I will take that as a compliment. : )

Very nice, I've been mulling over the tattoo thing lately, and that is certainly one that I think kicks ass.