Bush has to go 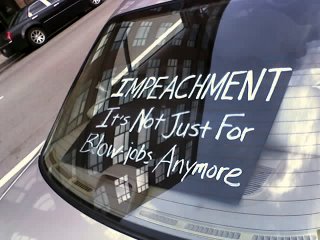 From Bush's November 30 news conference:
...Another major focus of media attention was the following Bush statement in a news conference with Maliki: "I know there's a lot of speculation that these reports in Washington mean there's going to be some kind of graceful exit out of Iraq. We're going to stay in Iraq to get the job done, so long as the government wants us there."

Bush also said "this business about graceful exit just simply has no realism to it whatsoever."


From the 60 Minutes Interview With Bob Woodward:

Bob Woodward: Late last year, he had key Republicans up to the White House to talk about the war, and said 'I Will Not Withdraw Even If Laura And Barney Are The Only Ones Supporting Me.' Barney is his dog."

Bush has to go.

Nancy Pelosi made a pledge that she will not bring impeachment proceedings against Bush, but it is a pledge she must break for the good of the country, and the world.

Even some key Repubs are finally seeing this President for what he is (an ignorant, totally incompetent bully.) My hope is that they will start to entertain the thought of impeachment -- not only because it's the right thing to do but, their own political futures may depend on it.
Posted by Lizzy at 12/03/2006 10:56:00 AM

I'm in between about impeachment. I agree he deserves it; he should've been impeached years ago. But I think investigations are a higher priority. If they can uncover lots of damaging information, these findings will be hanging there like a huge dark cloud during the 2008 election.

Even if Bush is impeached and/or tried for war crimes, he'll probably just sneak off to the new family estate in Paraguay and live there happily ever after.

I really don't want revenge as much as I want accountability, and information about how things got as bad as they did an America in such a short time. I'm not sure which would disgrace the GOP the most and provide more information. Go ahead with impeachment proceedings against Bush? or start several investigations of the adminstration's and GOP's role in various dumb things that have been happening? I think that either route would produce loads of damaging information re. the Republicans who have been running/ruining things. While I still lean toward investigations, impeachment would be fun to see... and while I don't really consider pursuing it as "revenge", I'm sure lots of Republicans would view it that way.

My sense of logic, for what it's worth, tells me that widely focusing on the Republican party itself might be better than more-narrowly focusing on a guy who very few members of the Republican party will have anything to do with by 2008. I think they're all smart enough to disassociate themselves from him by then, and to spin themselves in a way that having been Bush supporters in the past won't necessarily be a politically damaging thing. I will be interested in seeing what Karl Rove does during the next two years... my guess is that he will hang around with Bush but that he may spend most of his energy getting GOP candidates going for the 08 elections.

I still find myself thinking that investigations might do more to cover the range of people involved, whereas impeachment might tend to focus solely on Dumbya. We do tend to focus mostly on him, and while he is a huge part of the problem, I'm not sure is THE problem. I keep thinking that if Bush was impeached and removed from office, Dick Cheney would also have to be impeached. Otherwise we would end up with Cheney as president, which would not change things much as far as the White House pursuing ruinous policies. I wonder which guy is the worse problem, or which is more dangerous to the country and to the world... Bush or Cheney? I'm sure the only answer to that question is "BOTH".

But my gut tells me that Bush IS president, he is the most powerful person in the world, and he is not acting sanely. He is not listening to advice from anybody, and he continues to pursue and stick with reckless policies in the midst of overwhelming evidence that the USA is on the wrong track on a number of fronts. It appears we have a mentally ill person running our country, and this worries me. He is stubborn and narrow in his views, he seems to be thinking of himself and not of what his actions are doing to our country and to the world, and I'm not sure he is going to change during the next couple of years. THIS makes something more immediate than drawn-out investigations seem appealing, and... necessary.

I think investigations (which must be done) are going to bring out information that will demand impeachments.
Bush won't be the first to go under the hammer, but he shouldn't walk away like Nixon did either.

This time if the sucker resigns impeachment should still go forward.

I do find it rather interesting that the Bush clan has recently bought huge amounts of land in Paraguay of all places. Just like all of the old Nazis that escaped to South America, perhaps our war criminal in chief is making his arrangements as well!

I do agree investigations are necessary. Can you imagine all the things that we don't know about?

On the other hand, we already know of enough impeachable offences that he could be taken out now for.

About the land in Paraguay - why isn't the MSM reporting on this?!! Sickening.