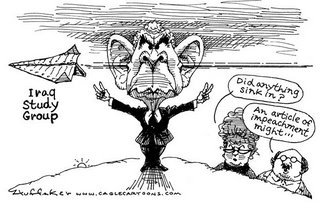 I absolutely love Huffaker's cartoons. This one is great.

In one ear and out the other... I think the only things that will ever sink in for this guy are things with which he already agrees. If it has to do with doing things in an opposite way from how Clinton did it (or would have done it), that is the route Bush will take. As the Major suggested in a comment at my blog, future presidents may well be asking Bush for advice, and then doing the opposite of what he says.

Let's try that impeachment thing and see how it goes.

It must be done. And I have a feeling, in the back of his mind, Bush would welcome it. I'm sure he'd rather clear some brush than deal with 2 more years of his mess.