I think these are only the top 10 reasons...

The Impeachment Petition from Democrats.com: 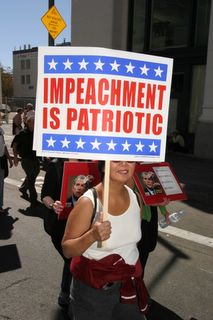 I ask Congress to impeach President Bush and Vice President Cheney for the following reasons:

1. Violating the United Nations Charter by launching an illegal "War of Aggression" against Iraq without cause, using fraud to sell the war to Congress and the public, misusing government funds to begin bombing without Congressional authorization, and subjecting our military personnel to unnecessary harm, debilitating injuries, and deaths.

2. Violating U.S. and international law by authorizing the torture of thousands of captives, resulting in dozens of deaths, and keeping prisoners hidden from the International Committee of the Red Cross.

3. Violating the Constitution by arbitrarily detaining Americans, legal residents, and non-Americans, without due process, without charge, and without access to counsel.

4. Violating the Geneva Conventions by targeting civilians, journalists, hospitals, and ambulances, and using illegal weapons, including white phosphorous, depleted uranium, and a new type of napalm.

5. Violating U.S. law and the Constitution through widespread wiretapping of the phone calls and emails of Americans without a warrant.

6. Violating the Constitution by using "signing statements" to defy hundreds of laws passed by Congress.

9. Subverting the Constitution and abusing Presidential power by asserting a "Unitary Executive Theory" giving unlimited powers to the President, by obstructing efforts by Congress and the Courts to review and restrict Presidential actions, and by promoting and signing legislation negating the Bill of Rights and the Writ of Habeas Corpus.

10. Gross negligence in failing to assist New Orleans residents after Hurricane Katrina, in ignoring urgent warnings of an Al Qaeda attack prior to Sept. 11, 2001, and in increasing air pollution causing global warming.

What a weirdo this guy is. I still have a hard time believing so many people voted for him in 00 and 04. Were the Democratic candidates really THAT bad? Or is the public that easily fooled?

There are definitely 10 very good reasons for Dumbya to be in office NO LONGER. There are probably about 1,000 more... Good post, I am going to visit the link right now.

Hell Ya Impeachment IS Patriotic.

This is something we need to convince the Majority of Americans of.

Bush tramples on the Constitution and that is UN-Patriotic. No amount of wars, flag waiving, and calling Democrats names can change that fact.

Congress swears an oath to preserve, protect, and defend The Constitution from enemies both foriegn and domestic.

To not impeach would violate their oath of office.