As a constituent of MN-05 that voted for Keith Ellison (D), I am personally offended by Rep. Goode's (R) letter. Goode should be thrown out of office. 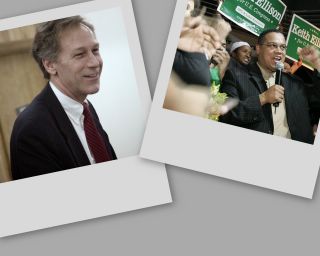 WASHINGTON (CNN) -- A Virginia congressman will not apologize for writing that without immigration overhaul "there will be many more Muslims elected to office demanding the use of the Quran," his spokesman said.

Republican Rep. Virgil Goode's letter to constituents also warns that without immigration overhaul "we will have many more Muslims in the United States."

Spokesman Linwood Duncan said Goode's letter was written in response to complaints his office received about Minnesota Rep.-elect Keith Ellison's request to be sworn in using the Quran.

Ellison is the first Muslim to be elected to Congress.

In it, Goode wrote, "When I raise my hand to take the oath on Swearing In Day, I will have the Bible in my other hand. I do not subscribe to using the Quran in any way.

"The Muslim representative from Minnesota was elected by the voters of that district and if American citizens don't wake up and adopt the Virgil Goode position on immigration there will likely be many more Muslims elected to office and demanding the use of the Quran.

"We need to stop illegal immigration totally and reduce legal immigration and end the diversity visas policy pushed hard by President Clinton and allowing many persons from the Middle East to come to this country.

"I fear that in the next century we will have many more Muslims in the United States if we do not adopt the strict immigration policies that I believe are necessary to preserve the values and beliefs traditional to the United States of America and to prevent our resources from being swamped."

He added, "The Ten Commandments and 'In God We Trust' are on the wall in my office. A Muslim student came by the office and asked why I did not have anything on my wall about the Quran.

"My response was clear, 'As long as I have the honor of representing the citizens of the 5th District of Virginia in the United States House of Representatives, the Quran is not going to be on the wall of my office.' "

The Council on American-Islamic Relations asked Goode to apologize.

"Rep. Goode's Islamophobic remarks send a message of intolerance that is unworthy of anyone elected to public office," the council's Corey Saylor said in a statement. "There can be no reasonable defense for such bigotry."

I am so very pissed off by the outrage many elected officals have had over this. It is not written in any law that the Holy Bible be used in a swearing in process. And furthermore he (Ellison) is a united states born American not an immigant. His (and all elected officals) religion should play no part in their actions as a publicly elected offical. We are in America where it is in our constitution to have the freedom to choose our religion. That is what America was founded on, why do the arrogant christian rightwingers feel it is necessary to rub our noses in their christiany goodness. Because its in the bible it must be right. Well incest, rape, and beastiality are all in the bible too...

Sorry Liz, just need to vent. This Rep. Goode really pisses me off!!!!

As far as I am concerned they should swear on the US Constitution, take religion out of it. I have to say I didn't read Goode's comments verbatim until I read your post Lizzy. First a little background, I worked on Goode's campaign in 92 while in college, we were teamed with some of Clintons rapid response team and Goode made several appearances with cantidate Clinton and did a good job drumming up support for the Clinton Gore ticket in the district, we carried that part of the state handily, of course this is before Goode switched over to the GOP. I have to say my experiance with Goode was that he was honest, a real populist and very pro-labor, as well as having a good voting record on civil rights and affirmative action issues, his father was instrumental in the 70's as a democratic state politician in integrating VA public schools, I respected the guy. That said these comments show that he is not the same person I worked for. I have been defending him even though his switching parties pissed me off, but these comments are show that Virgil Goode has lost it by pandering to the worst redneck racist xenophobes among his constiuents. It really makes me sad to actually read this crap from a guy I used to respect.

I didn't know that, elvez. Thanks for the background info.

I wonder what happened to him? One of our US Senators, Norm Coleman, used to be a dem then switched. And while Norm has said & done some things that I don't agree with, he would never sink that low.

I think your idea of swearing on the constitution is a very good one. Religion doesn't belong in Gov't in the first place.

Goode doesn't belong in office.
The level of bigoty that he has espoused is beyond "opinion".

No good man or womand should be willing to stand next to him at the group ceremony.

Goode should be removed from office by his constituency. He is an embarassment to Congress.

Incidently, there is no religious Oath required or permitted for Congress:

..The Senators and Representatives before mentioned, and the Members of the several State Legislatures, and all executive and judicial Officers, both of the United States and of the several States, shall be bound by Oath or Affirmation, to support this Constitution; but no religious Test shall ever be required as a Qualification to any Office or public Trust under the United States.

Again what we have is a blurring of the facts by winguts to further their own agenda which is to put America under Christian Taliban rule.

The "oaths" Congress men and women "swear" on a Bible are photo props. They are not official. They are done for the benefit of their consituency. For Christians it's the Bible, for Jews it's the Torah, and naturally for Muslims that would be the Koran.

I would bet that some of the only people who agree with Goode's sentiments are the ones in high places and on the AM radio dial. In order to keep my blood pressure at a decent level, I haven't been paying attention to what the wingnut talkers have to say about Goode's idiocy, but I am guessing that people like Rush Limbaugh and Sean Hannity are all over this letter, praising it up one side and down the other.

I agree with what Keira says. I think we are beginning to see "political correctness" replaced by "theological correctness". There is nothing that says a person has to be a Christian to be elected in America.

Elvez, that is very interesting... I wonder what happened to Goode. Did he fall and hit his head?

Polishifter provides us with great info simply by posting what it says in the Constitution. Really, that is all the further we need to look to see what the Christian fundamentalists are trying to do. They are already turning America into Dumbfuckistan, and their goal is to turn it into Jesusistan. Scheise! Time to read "The Handmaid's Tale" again...

"their own agenda which is to put America under Christian Taliban rule."

LOL, YES, down with the Christian Taliban individuals which threaten our society with their religious bigotry and doctrines..

Give me a fucking break...