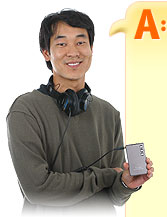 Several years ago, there was a great cable/satellite TV network called TechTV. I used to watch it several hours a day. It is where I learned almost everything I know about computers, and anything geeky. "The Screen Savers," "Call for Help," and "Fresh Gear" were among the great shows on the network. I actually got on the shows several times, via webcam, to ask tech questions.

Then, unfortunately, a couple years ago, TechTV's rival, G4, bought them out and ruined everything...but enough about that.

In the good old days of TechTV, there was a sweet Asian man named James Kim. He was one of those people that you just knew was a great person. His good vibes came right through the TV.

When I heard the news of his death today, I was extremely saddened.

This is such a sad story. I tear up everytime the news starts talking about it. I have been sort of following the story on the news the past two days. I had no idea he was a tv personality.

OMG, is that who he was? It's all coming together now. Ah jeez, I didn't know that. This makes it even worse, if that's possible.

The whole thing really bummed me out, too. Such a shame.

Holy shit Lizzy, I had no idea that thats who he was! Like you I learned 75% of my tech knowledge from that channel. What an absolute tragedy.

I never knew James Kim from TV, but I'm saddened nonetheless. Apparently vandals may have knocked down the "road closure" gate where the family drove in. He did a brave thing to try and go for help for his family. I just wish he had stayed with them.

Everytime they talk about him on TV, I get choked-up. I wish he had stayed with his family, too.

God I picked up most of my tech knowledge from trail and error, and hanging out with friends who worked in IT. Missed that news though, total bummer, poor young dude.

I just went and read the news. That's tragic. At least his wife and kids survived but tragic nonetheless.