BAGHDAD, Iraq — The defense minister has canceled leave for all army officers, apparently fearing violence after Sunday's expected announcement of a verdict in the trial of Saddam Hussein.


From Lizzy:
I knew the administration would pull something like this right before the election. However, in the grand scheme of things, convicted Saddam means very little at this point.

I'm with Bill Maher on this one. Instead of convicting & executing Saddam, let's give him his old job back. Either he'd whip his country into shape, or his people would kill him -- it's a risk we should take. (Am I just kidding? I'm not so sure.) 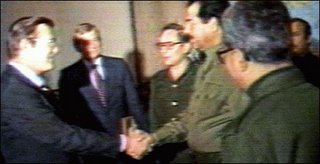 I am sure the Republicans are planning on getting some mileage out of a "Saddam guilty" verdict, or the announcement wouldn't have been scheduled for two days before our elections.... but I don't think they will get much from it because the whole world knows Saddam is guilty anyway, and the whole world doesn't need the United States saying "See we told you so" in order to help them realize the obvious. American voters won't need to hear this from the administration to help us realize the obvious, either.

Such an announcement will provide nothing more than a distraction from the fact that we STILL have something like 130,000-140,000 troops in Iraq, and that General Casey recently requested MORE troops... and that our troops will be in Iraq as long as Bush is president, or at least as long as the GOP controls the House and Senate.

Here's hoping that the media doesn't play up the Saddam verdict. Sure it will be announced, but it will basically be old news, rehashed during the GOP's infamous 72-hour push just prior to Election Day. Here's hoping the media not only doesn't play it up, but that they ask questions about the timing of the verdict.

The GOP plan might backfire... Saddam might be guilty, which is well and good... but if such an announcement sparks new violence, it really won't look so great...

Canceled leave?
These are the same guys that go AWOL when deployed outside their own neighborhoods by the Iraqi government.

If the Bushies wanted the Saddam verdict read prior to the election I think it could REALLY backfire on them. It might just make the Sunnis go beserk, which is not good for the GOP right now.

You guys are right. I hadn't thought it through.

Hey, Lizzy- we're not saying you're wrong. It's all too possible Bush planned this without really thinking what the consequences might be. That seems to be his M.O.

I think the Major is correct, L, you aren't wrong.

Bush rushes into lots of things based on his gut feelings without considering what the longer-term results of his actions might be. If Bush is indeed trying to validate the Iraq War just before the election, I think it's a bit too late for the story itself to be spun properly... it may be the Iraqi reaction to a verdict that gets the spin, and it may not get spun the way Bu$h has in mind.

He sucketh mightily, plain and simple. He is The Chimperor.

I agree, I think this was the plan.
I just don't think the plan included the publics stomach turning sour on the fake connection between Iraq and 9/11.

Thanks guys! : ) Everyone is right.