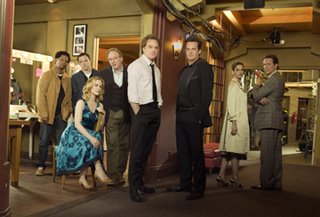 NBC's "Studio 60 on the Sunset Strip" is one of the best shows of the new season.

On the show, there has been an ongoing battle between 2 of the characters; "Matt" the head writer/Hollywood liberal, and "Harriet" the anti-gay Christian-right actress.

A couple weeks ago, Harriet asked Matt to explain the culture wars. Matt's response was the best line (and most succinct explanation) I've heard from a TV show in years:

Harriet: I don't even know what the sides are in the culture wars.

You're right, that statement really nails it.

It reminds me of all the times I've heard right-wing media folks accuse liberals of being "elites". During the past 25 years the GOP has relied more and more on cultivating a culture of whining defensiveness (i.e. if you're against the war you hate the soldiers). This has been especially effective in the South...a place that very often takes great pride in their tradition of stupid choices.

Whew... that's a great statement! I had to read it a couple of times to get the whole meaning of it, but I can be slow that way.

Major, that crap about "elites" just pisses me off. I think that the longer the GOP has been in control, the more the whiny defensiveness has escalated, and the party has made good use of their radio and TV talkers to help ingrain this mindset in millions of Americans. Ick.

But I may have to take a look at that program! It sounds like it might be pretty entertaining.

I knew you guys would appreciate it.