Russ would make an excellent VP 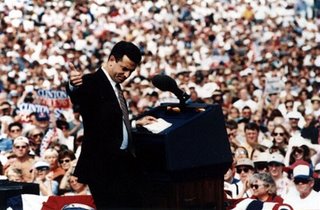 I was saddened to learn that Russ Feingold has decided not to run for President in '08, but I do understand it. Unfortunately, he just doesn't have the name recognition among the general public.

I'm going to hold out hope that he is going to be picked as someone's running mate.

Now that Russ has bowed out, my choice is Barack Obama (surprise, surprise.)

Biden's too much of a corporatists for my taste

Wesley Clark I would vote for as well as Obama

I'm on the fence with Hilary

Absolutely NO for me in regards to Kerry, McCain, Frist, Jeb

At this point, no matter who the nominee is, I will likely support any Dem over the Repug.

I am a little concerned however about going through another period of one party rule. But I trust Dems with my money far more than repugs.

And I don't think Dems would get us in unnecessary invasions of countries based on fixed intelligence.

A Feingold/Obama ticket has been my dream, and I still feel it's the only real chance for a win in 2008. I think Russ needs some strong encouragement from every Dem/Liberal out there. The 'name recognition' thing should not be, and is not, a good reason to bow out. True ideas and a commitment to real change wouldn't take long to grab headlines. I'm not ready to throw in the towel...and we've seen candidates change their minds before. I just fired off a note to Feingold asking him to strongly reconsider. I'll keep my fingers crossed that enough others feel the same way.

polishifter, I hadn't heard that about Biden. I'll have to look into that.

brian, I was only speculating that the name recognition issue was one of the reasons he dropped out. I don't know why he did.

You are right. We should not give up on Feingold. I can't think of a politician I admire more.

Feingold would be fine with me, either as president or as VP. I think he might be too much to the left for lots of American voters, but then again, that would depend upon how well the Democrats can take control of the debate away from the GOP. It the Dems can do a good job of defining the issues and defining their opponents, a candidate such as Feingold would do fine.

I've gone on record a number of times before saying that I don't think Hillary Clinton should run. Too polarizing, too much of a lightning rod, too much baggage from the years Bill was president. The Rove-ites would have a field day, and the American public would never be given a clue as to what the real campaign issues were... it would all be about Hillary. Whether her politics would be tolerable or not, I think she is far too easy for the GOP to define. And I'm not sure she has made her stances clear on some issues...

My first choice for the presidential nomination would be Obama, but I find Bayh interesting.

Evan Bayh seems like he is friendly toward small business, he sounds interested in making college more affordable and also targeting at-risk students.

On Iraq and terrorism, ""The sad truth is that nearly five years after 9/11, this president has made the country less secure than we were before the attacks. We have tinkered around the edges of homeland security without making the tough decisions and investments needed to make us truly safe. And perhaps worse of all, we have taken our eye off the ball in the war on terror.

It is clear to just about everyone but the die-hard neoconservatives within this administration that shifting our focus away from Osama bin Laden to Saddam Hussein was perhaps the biggest strategic blunder in our nation's history. And while we have been preoccupied with Iraq, under this President North Korea has gone nuclear and Iran is on the verge of doing so."

"It’s gonna change, my friends, when we go to the American public, and convince them that its going to take all of us to move this country forward. Young and old, rich and poor, rural and urban, black and white. Because in the words of the civil rights leader I had the privilege to listen to, about 20 years ago now, “We may have arrived in this country in different ships, but we’re all in the same boat now.” That’s right. And we need to tell the American people the truth, the truth the other side doesn’t want them to hear. You know, those folks, Karl Rove and that crowd, they’re so good, they’re so good at dividing this country, dividing this country along lines of race or ethnicity, or religion or orientation, for cheap short-term political gain. But it hurts this country. It hurts this country. We need to do better than that. We need to be better than that. By reconciling differences, by building bridges across the divide, by reminding the American people of the truth that we realize here in Colorado here tonight, that we’re one people, with a common heritage, forged from a common bond, with a common destiny. That’s the truth. That’s the truth."

Also: "The Administration has increased the national debt by nearly $3 trillion, money our Middle Class and children must repay with interest. They borrow from Japan, China, Persian Gulf Countries, South Korea, Taiwan, Hong Kong, Germany, even Mexico. They are mortgaging our future. This is not how great leaders act." - July 25, 2006

Do any of you know anything else about Bayh? Would he be electable as president, or is he more suited to a VP role?

Thanks for posting those Bayh quotes, Snave. I don't know a lot about him, but after reading that, I like what I hear.

As far as Hillary goes, she probably would make a good President and I would support her if she was the candidate, but I hope & pray that she WON'T be. Like you said, she has far too much baggage and would be the Right's wet dream.

Hillary divides the Democratic party & that's the last thing we need. I hope she does the right thing and decides not to run. She should look out for the good of the party and the country - not herself.

Tuesday on CNN's Wolf Blitzer program, Dick Armey was on there, saying "I HOPE she runs!" re. Hillary, and he was getting this giddy, gleeful look on his face... If Dick Armey wants her to run, I definitely don't want her to run.