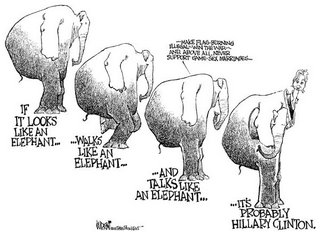 The following news item pisses me off. Who are these 530 registered Dems they polled for this, because I don't buy these results for a second. Like I've said many times before, I've never been polled, and no one I know has ever been polled. If we had been, Hillary would be at the bottom of this list.

When Obama announces his candidacy after the holidays, I'm hoping he knocks Hillary off the top of this ridiculousness.

WASHINGTON (CNN) -- Sen. Hillary Rodham Clinton, D-New York, remains the frontrunner for the Democratic Party's presidential nomination in 2008, with more than twice the support of any of her potential rivals, a new CNN poll shows.

Interviews with 530 registered voters who describe themselves as Democrats or Independents who lean to the Democratic Party conducted by telephone on November 17-19 by Opinion Research Corporation. Sampling error: +/-5% pts

Those results ARE pretty disgusting.

Looks like the top four would be the frontrunners, Kerry is probably a no-go (I hope so, anyway) and other than Kerry, the ones from about #5 down are probably VP types.

I know, I haven't been polled for something like this either. Who are they polling, anyway?

I was polled a few months back...Remember?

Yeh, I view these results with a sceptical eye myself. I really like and respect Hillary. She is a hell of a Senator, and I certainly loves me some Bubba, but she can't win a presidential election. I think she serves the party better and will be more effective in the Senate. Personally I like Obama/Edwards or Edwards/Obama that would be my dream ticket.

I don't hate Hillary, I just worry that she can't win it. I like Gore or Edwards with Obama the VP pick for either one.

Laura, I remember that phone call, but it wasn't a poll like this one.

I don't hate Hillary, I just hate the pandering. We need someone who will lead with the will of the people - not someone who plays it safe all the time. Playing it safe will not get us anywhere.

However with that being said, if she is going to be the candidate, she will have my vote -- but like J & elvez said, it's highly unlikely that she can win.