My kind of Democrats 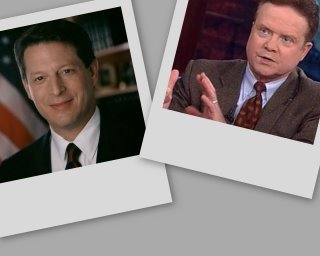 From the Al Gore interview in GQ:

"... And you know, I’m even reluctant to talk about it in these terms because it’s so easy for people to hear this or read this as sort of cheap political game-playing. I understand how it could sound that way. [Practically screaming now] But dammit, whatever happened to the concept of accountability for catastrophic failure? This administration has been by far the most incompetent, inept, and with more moral cowardice, and obsequiousness to their wealthy contributors, and obliviousness to the public interest of any administration in modern history, and probably in the entire history of the country! "

November 29, 2006
RICHMOND, Va. -- Jim Webb made was clear during his successful Senate race that his son's combat role in Iraq was a sore subject, and President Bush learned it for himself in a chilled recent exchange at the White House.

At a private reception for newly elected members of Congress two weeks ago, the Democratic senator-elect and leading Iraq war critic had avoided a receiving line and photo op with Bush. Then, the president found Webb.

At that point, Webb said, Bush got a response similar to what reporters and others who had asked Webb about Marine Lance Cpl. Jimmy Webb, 24, have received since the younger Webb left for Iraq around Labor Day.

"I told him that was between my boy and me," Webb said.

Please run Al, please please please. I love Jim Webb, he's a cranky old Marine who doesn't suffer fools gladly. I also love the fact that he refused to pose in the photo op at the White House. He has a visceral hatred of W that I share and that was clear to the people of Virginia when we elected him. Bipartisanship and statesman-like rhetoric is great, but sometimes you just have to stand up to the fratboy in chief. Jim Webb is the man!

I like when Al, or any politician, gets angry, too. That's when the truth really comes out.

elvez, I couldn't agree more. We need more men like Webb...he has strength, character and doesn't pussy-foot around.

Gore would certainly be my favorite so far (now that Feingold is out.)