Cut and Run, the Only Brave Thing to Do...by Michael Moore

Next time you hear a Righty say "the Dems want to cut & run," you say ABSOLUTELY. 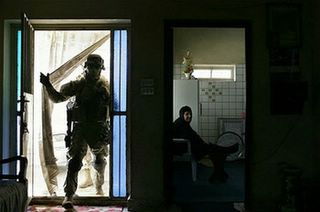 Tomorrow marks the day that we will have been in Iraq longer than we were in all of World War II.

That's right. We were able to defeat all of Nazi Germany, Mussolini, and the entire Japanese empire in LESS time than it's taken the world's only superpower to secure the road from the airport to downtown Baghdad.

And we haven't even done THAT. After 1,347 days, in the same time it took us to took us to sweep across North Africa, storm the beaches of Italy, conquer the South Pacific, and liberate all of Western Europe, we cannot, after over 3 and 1/2 years, even take over a single highway and protect ourselves from a homemade device of two tin cans placed in a pothole. No wonder the cab fare from the airport into Baghdad is now running around $35,000 for the 25-minute ride. And that doesn't even include a friggin' helmet.

Is this utter failure the fault of our troops? Hardly. That's because no amount of troops or choppers or democracy shot out of the barrel of a gun is ever going to "win" the war in Iraq. It is a lost war, lost because it never had a right to be won, lost because it was started by men who have never been to war, men who hide behind others sent to fight and die.

Let's listen to what the Iraqi people are saying, according to a recent poll conducted by the University of Maryland:

Yes, the vast majority of Iraqi citizens believe that our soldiers should be killed and maimed! So what the hell are we still doing there? Talk about not getting the hint.

There are many ways to liberate a country. Usually the residents of that country rise up and liberate themselves. That's how we did it. You can also do it through nonviolent, mass civil disobedience. That's how India did it. You can get the world to boycott a regime until they are so ostracized they capitulate. That's how South Africa did it. Or you can just wait them out and, sooner or later, the king's legions simply leave (sometimes just because they're too cold). That's how Canada did it.

The one way that DOESN'T work is to invade a country and tell the people, "We are here to liberate you!" -- when they have done NOTHING to liberate themselves. Where were all the suicide bombers when Saddam was oppressing them? Where were the insurgents planting bombs along the roadside as the evildoer Saddam's convoy passed them by? I guess ol' Saddam was a cruel despot -- but not cruel enough for thousands to risk their necks. "Oh no, Mike, they couldn't do that! Saddam would have had them killed!" Really? You don't think King George had any of the colonial insurgents killed? You don't think Patrick Henry or Tom Paine were afraid? That didn't stop them. When tens of thousands aren't willing to shed their own blood to remove a dictator, that should be the first clue that they aren't going to be willing participants when you decide you're going to do the liberating for them.

A country can HELP another people overthrow a tyrant (that's what the French did for us in our revolution), but after you help them, you leave. Immediately. The French didn't stay and tell us how to set up our government. They didn't say, "we're not leaving because we want your natural resources." They left us to our own devices and it took us six years before we had an election. And then we had a bloody civil war. That's what happens, and history is full of these examples. The French didn't say, "Oh, we better stay in America, otherwise they're going to kill each other over that slavery issue!"

The only way a war of liberation has a chance of succeeding is if the oppressed people being liberated have their own citizens behind them -- and a group of Washingtons, Jeffersons, Franklins, Ghandis and Mandellas leading them. Where are these beacons of liberty in Iraq? This is a joke and it's been a joke since the beginning. Yes, the joke's been on us, but with 655,000 Iraqis now dead as a result of our invasion (source: Johns Hopkins University), I guess the cruel joke is on them. At least they've been liberated, permanently.

So I don't want to hear another word about sending more troops (wake up, America, John McCain is bonkers), or "redeploying" them, or waiting four months to begin the "phase-out." There is only one solution and it is this: Leave. Now. Start tonight. Get out of there as fast as we can. As much as people of good heart and conscience don't want to believe this, as much as it kills us to accept defeat, there is nothing we can do to undo the damage we have done. What's happened has happened. If you were to drive drunk down the road and you killed a child, there would be nothing you could do to bring that child back to life. If you invade and destroy a country, plunging it into a civil war, there isn't much you can do 'til the smoke settles and blood is mopped up. Then maybe you can atone for the atrocity you have committed and help the living come back to a better life.

The Soviet Union got out of Afghanistan in 36 weeks. They did so and suffered hardly any losses as they left. They realized the mistake they had made and removed their troops. A civil war ensued. The bad guys won. Later, we overthrew the bad guys and everybody lived happily ever after. See! It all works out in the end!

The responsibility to end this war now falls upon the Democrats. Congress controls the purse strings and the Constitution says only Congress can declare war. Mr. Reid and Ms. Pelosi now hold the power to put an end to this madness. Failure to do so will bring the wrath of the voters. We aren't kidding around, Democrats, and if you don't believe us, just go ahead and continue this war another month. We will fight you harder than we did the Republicans. The opening page of my website has a photo of Nancy Pelosi and Harry Reid, each made up by a collage of photos of the American soldiers who have died in Bush's War. But it is now about to become the Bush/Democratic Party War unless swift action is taken.

This is what we demand:

1. Bring the troops home now. Not six months from now. NOW. Quit looking for a way to win. We can't win. We've lost. Sometimes you lose. This is one of those times. Be brave and admit it.

2. Apologize to our soldiers and make amends. Tell them we are sorry they were used to fight a war that had NOTHING to do with our national security. We must commit to taking care of them so that they suffer as little as possible. The mentally and physically maimed must get the best care and significant financial compensation. The families of the deceased deserve the biggest apology and they must be taken care of for the rest of their lives.

3. We must atone for the atrocity we have perpetuated on the people of Iraq. There are few evils worse than waging a war based on a lie, invading another country because you want what they have buried under the ground. Now many more will die. Their blood is on our hands, regardless for whom we voted. If you pay taxes, you have contributed to the three billion dollars a week now being spent to drive Iraq into the hellhole it's become. When the civil war is over, we will have to help rebuild Iraq. We can receive no redemption until we have atoned.

In closing, there is one final thing I know. We Americans are better than what has been done in our name. A majority of us were upset and angry after 9/11 and we lost our minds. We didn't think straight and we never looked at a map. Because we are kept stupid through our pathetic education system and our lazy media, we knew nothing of history. We didn't know that WE were the ones funding and arming Saddam for many years, including those when he massacred the Kurds. He was our guy. We didn't know what a Sunni or a Shiite was, never even heard the words. Eighty percent of our young adults (according to National Geographic) were not able to find Iraq on the map. Our leaders played off our stupidity, manipulated us with lies, and scared us to death.

But at our core we are a good people. We may be slow learners, but that "Mission Accomplished" banner struck us as odd, and soon we began to ask some questions. Then we began to get smart. By this past November 7th, we got mad and tried to right our wrongs. The majority now know the truth. The majority now feel a deep sadness and guilt and a hope that somehow we can make make it all right again.

Unfortunately, we can't. So we will accept the consequences of our actions and do our best to be there should the Iraqi people ever dare to seek our help in the future. We ask for their forgiveness.

We demand the Democrats listen to us and get out of Iraq now.

Amen, Michael. I laugh grimly everytime I hear somebody talk about "changing tactics" or putting pressure on the Iraqi government to get things under control. This war was always unwinnable. We on the Left knew exactly how things would play out in Iraq.

I love that chubby unshaven bastard!

This article plus the one The Major printed by Chuck HAgel are proof that in our midst there are people of stature who are based in reality. As Bush's stranglehold on power winds down, I believe more and more American will become vocal in this manner. Thanks for posting this, it's good to read!

I'm actually starting to take a pretty dark view of it myself, I mean whats it all been for?
Such a mess, so many wasted lives.