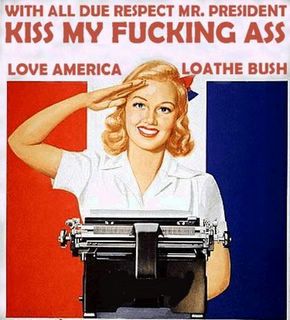 Guessing how long it will take before President Bush invokes 9/11 in a speech is one of our favorite diversions at the Huffington Post. The over/under is usually around 90 seconds. Will he best that during his upcoming State of the Union address? Given all the pomp and circumstance, it's not likely. But you never know. We'll have our stopwatches handy.


As far as the Huffington Post 9/11 Beat the Clock game goes, I'll give him 3 minutes.

You are braver than I am (just considering watching it.)

During the first half of it I was counting wore frequency... he didn't use "9-11" very much, but he used variations of the word "terror" over twenty times. "Freedom", variations of "democracy" and variations of "Iraq" were also popular. He got like a stern father at one point and told us not to question the war, that we're there, and we have to finish the mission. (But what is the mission? What was it originally?)

Sounds like "Keeping America Competitive" is going to be the GOP slogan for this next year. Bush spoke in nebulous terms about some issues here at home, but he did implore the continuation of his tax cuts. I guess you can't get rid of social programs unless you cut off their flow of funding.

Tim Kaine didn't do a bad rebuttal. From him, it sounds like our slogan will be "There's a better way". We know there is, I just hope the majority of Americans don't dismiss Kaine and the Dems and side with Bush. He didn't sound particularly convincing to me about anything he brought up during the SOTU address.

I didn't even consider watching it.
After reading it, I'm even more happy I didn't.
The man is a simp and even his speech writers couldn't hide it.

Expelling the wife of a Republican and ARRESTING Cindy Sheehan did not raise the credibility of the staged event.

Can someone explain to me how he gets away with his failure to protect the country on 9/11 and use it as a political plus?
This is like asking a wife beater to run a shelter for battered women.

I thought Tim Kaine was a good choice to do the rebuttal, however the rebuttal should have been much stronger.