Both of these are courtesy of my friend, Brian...another proud liberal. 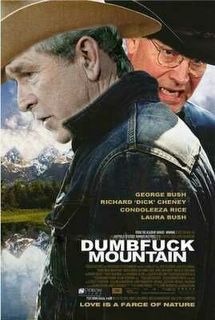 President George W. Bush was scheduled to visit the Methodist Church outside Washington, D.C. as part of his campaign. Bush's campaign manager made a visit to the Bishop, and said to him,

"We've been getting a lot of bad publicity among Methodists because of Bush's position on stem cell research and the like. We'd gladly make a contribution to the church of $100,000 if during your sermon you'd say the President is a saint."

The Bishop thinks it over for a few moments and finally says, "The Church is in desperate need of funds and I will agree to do it."

Bush pompously shows up looking especially smug today and as the sermon progresses the Bishop begins his homily:

"George Bush is petty, a self-absorbed hypocrite and a nitwit. He is a liar, a cheat, and a low-intelligence weasel. He has lied about his military record and had the gall to put himself in a jet plane landing on a carrier posing before a banner stating 'Mission Accomplished.' He invaded a country for oil and money, and is using it to lie to the American people. He is the worst example of a Methodist I've ever personally known. But compared to Dick Cheney and the rest of his cabinet, George Bush is a saint."
Posted by Lizzy at 1/12/2006 02:13:00 PM

Damn skippy I still can't believe the guy has'nt been impeached yet!!

Don't we wish that weren't a joke. I'd consider becoming a methodist under such circumstances. And I'm not even a believer.

I was a Methodist most of my life (until about seven years ago) and decided not to worry about trying to be a Christian anymore. The last seven years have been pretty nice, very relaxed.

There are enough liberal Methodist churches out there that if you decided to go the protestant route it could provide a good choice. The Episcopalian church also tends toward liberalism and tolerance.

On the flip side, there are also a lot of Methodist churches out there that tend toward fundamentalism. I believe it may tend to depend on what part of the country you live in. Anyway, most of the ones I have been to in the Northwest seem to be attended by tolerant people who work for social justice.

Is Bush really a Methodist? I have a hard time believing that. Pentecostal Methodist, maybe.