"Nonviolence is the answer..." MLK 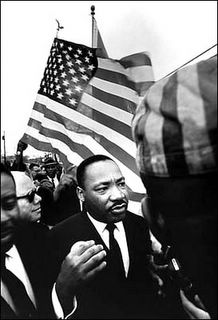 "A nation that continues year after year to spend more money on military defense than on programs of social uplift is approaching spiritual death."

"Like an unchecked cancer, hate corrodes the personality and eats away its vital unity. Hate destroys a man's sense of values and his objectivity. It causes him to describe the beautiful as ugly and the ugly as beautiful, and to confuse the true with the false and the false with the true."

"The church must be reminded that it is not the master or the servant of the state, but rather the conscience of the state. It must be the guide and the critic of the state, and never its tool. If the church does not recapture its prophetic zeal, it will become an irrelevant social club without moral or spiritual authority."

"If a man hasn't discovered something that he will die for, he isn't fit to live."

I'm totally understanding why MLK still has such a huge impact on the way vast amounts of people see the world, great stuff by a great guy.