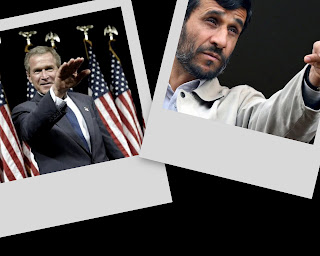 Mahmoud Ahmadinejad the president of Iran spoke at Columbia University today. I heard that he was invited there because the President of Columbia wanted to foster a “free exchange of ideas.” Even though I am not an Ahmadinejad supporter, I know he was elected in Iran in a knee-jerk and understandable response to the USA’s bloodily unnecessary invasion of Iraq, as many reactionery governments have been elected in that region and all over the world in response to the spreading US corporate and military empire.

Citing such human rights’ violations in the form of imprisonment and executions, the President of Columbia University, very boorishly said that Ahmadinejad appeared to be a “petty and cruel dictator.” First of all, how does one invite someone to your place for a “free exchange of ideas,” and be such a rude American? Did he only invite Ahmadinejad so he could publicly scold him or to become the darling of Fox News?

Secondly, what about our President who appears to be a “petty and cruel dictator?” George Bush presided over a stunning amount of executions when he was Governor of Texas and the US is operating torture prison camps, openly and secretly, all over the world. BushCo has fought the Supreme Court and Congress for the right to hold thousands of humans without their human rights of due process and they have also been strenuously committed to the strategy of torture---or “enhanced interrogation methods” as the Ministry of Truth likes to call it. A Reverend gets beaten down in the halls of Congress; nooses are being hung in the south; students are being tased on campuses and Congress is censuring Freedom of Speech…how much evidence do we need before we decide that something is profoundly wrong in present-day America?

In 2006, China, the leading practitioner of state sanctioned murder in the form of execution, killed 8000 people in this manner. However, the Premier of China is welcomed to the US by George Bush who is probably envious of President Hu Jintao's record. We borrow vast sums from China to wage our wars and China is our major trading partner. Wal-Mart’s cheap and dangerous crap is manufactured by near slaves there, but somehow that is okay? Somehow it is okay to welcome Communist China with open arms, but demonize and disparage a Socialist like Hugo Chavez of Venezuela? America has a very lucrative prison business and is the only country in the Americas that practices execution. A barbarian is a barbarian no matter what color, religion or nationality they are.

George Bush has added signing statements to almost 1000 bills that he has signed into law saying that he doesn’t have to obey those very same laws. We have the Nazi-ist sounding Department of Homeland Security which seems to be obsessed with keeping my un-zip-locked baggied lip-gloss off of flights. The un-Patriot Act and breaking of FISA laws and our 4th Amendment right to be secure against unreasonable search and seizure have turned the “Land of the Free” into the “Home of the Slaves.”

Another boorish American, Scott Pelley (of 60 Minutes) hammered Ahmadinejad about sending weapons into Iraq without even once acknowledging the immoral tons of weapons that we rained on the citizens of Iraq during “shocking and awful;” the cluster bombs that look like toys that litter the killing fields of that country and have killed and maimed so many children; the mercenary killers that outnumber our troops and use the people of Iraq for target practice; the thousands of tons of weapons that the US let out of such weapons dumps as al-Qaqaa that were left unguarded while the oil ministry was heavily fortified. Not to mention that America supported Iraq in its eight year long war with Iran that killed an unbelievable amount of people on both sides of the border. The hypocrisy of our system is spectacular and deadly in both ignorance and arrogance.

We here in America are living in a fascist state that regularly puts corporate profits and an insatiable and evil thirst for power above people and their needs. Our supercilious leaders and media are so busy calling the kettle black, they don’t notice or care how dark our pot is. We are supporting Israel in their human rights violations against Palestine, illegally occupying two countries on our own and we have the nerve to claim any kind of moral superiority over anybody?

The fascist, near dictatorship of the Bush regime (a la Nazi Germany) has even intimidated universities to align with their hypocritical murderous rhetoric. Universities should feel free to invite anyone to speak to open much needed dialogue in our country and in the world. And if a person is invited, they should be treated by the person who invited them with a slight modicum of courtesy and then let the rocking and rolling begin with the “Q & A”…which would truly be a free exchange of ideas. I am surprised President Bollinger didn’t have President Ahmadinejad tased.

Peace is going to take all the nations working in cooperation to limit naked aggression and human rights’ violations, not just the ones which the US declare as evil. How many nukes do we have? How many does Pakistan have? How many does India, Israel, North Korea, and the former Soviet Union have? Should the rhetoric be about destroying all weapons of mass destruction and not just prohibiting Iran from obtaining one?

Many countries are committing human rights' violations and sending arms and troops into many parts of the world. America's biggest export is violence and we would do well to call for an end to all occupations and violence by beginning to end our own.

I was also disappointed that the host was so rude to Ahmadinijad. Very bad form. Bush's behavior toward other heads of state is even more embarrassing.