Coen brothers to get 'Serious' in Minnesota 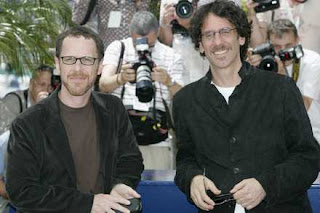 For the first time since their Oscar-winning 1996 film "Fargo" brought duck stamps, wood chippers and "you betcha" into the national consciousness, the Coen brothers are returning to Minnesota to make a movie.

"A Serious Man," set in their hometown of St. Louis Park, will begin shooting in the Twin Cities in March, Lucinda Winter, executive director of the Minnesota Film and TV Board, said Friday.

Joel and Ethan Coen helped scout locations this summer, Winter said. "They looked in Richfield, Brooklyn Center, maybe Hopkins -- neighborhoods that would match the one they grew up in."

The Coen-scripted dark comedy centers on "Larry Gopnik, a Jewish college professor in the Midwest during the 1960s," according to the website FilmJerk. Bedeviled by children who lift his wallet, a wife who wants a divorce, a too-intense grad student and a hot neighbor who sunbathes in the nude, "he starts to question the value of life."

Perhaps not coincidentally, the Coens' parents were college professors.

The Coen brothers could not be reached for comment Friday night. They are in New York City, filming their next feature, "Burn After Reading," which stars George Clooney, Brad Pitt and Frances McDormand, the "Fargo" star and wife of Joel Coen.

Meanwhile, their critically praised bloody thriller "No Country for Old Men" will open in November.

After a drought in Minnesota film production alleviated only by "North Country" in 2005 and "A Prairie Home Companion" last year, Winter said she was "over the moon."This is a serious production," she said. "They'll be here from January [for preproduction] through June. There'll be jobs for about 100 Minnesotans."

Just as important, she said, it will "jump-start our visibility as a film location. Even now, people come up to me and say, 'Oh, Minnesota -- 'Fargo.'"

Producers also scouted locations in Wisconsin, but opted for the Coens' home state because of its "Snowbate" incentive program. Reinstituted in July 2006, it returns up to 15 percent of film production money spent in Minnesota.

From Lizzy:
This is the best news I've heard all week. I'm definitely going to try to work on this film somehow. They are filming it in my neighborhood!

Hope you get to work on that movie, Lizzy.

I, for one, definitely want you to post about your smooshy-faced dogs.

And, as for what else to blog about besides politics - well, there's always sex... (see mah blog for today's post). :)

How cool. If I was put on a desert island and told I could only take movies by one director (or in in this case, two) it would have to be the Coen Brothers.

That is great news! Good luck Lizzy, I hope you get to work on the film.

At the very least, I'm going to do my damnest to be an extra, Candace & LT.

There will be smushy-face dog posts coming soon, C.

Sex, huh? That is one of my favorite topics, but my family reads my blog...so that would be weird. However, it is a part of life (big part), so maybe I will.

I agree, J. Coen Bros films rule. I've think I've seen all of them. My favorites are Fargo, Oh Brother, and Raising Arizona.

Cool. I didn't know the Coen Bros. were from your same town. I knew they were from that general area. I'm looking forward to their new film. Hope you get a part in it.

I love the Coens' films. The Big Lebowski is one of my all-time favorites, as are O, Brother Where Art Thou, Fargo and Raising Arizona. I don't think I have ever disliked any film they have made. I hope you can get involved with the "Serious" effort somehow, that would be SO cool!!

Good luck and keep us up to date on how it goes.

Yep, they sure are, Tom. Cool beans, huh!

Snave, it would be super-duper cool!

Good ole NZ gal directed 'North Country' Nikki Caro met her quite a few times when she filmed Whale Rider near my neck of the woods in NZ.

Loved the Big Lebowski late 90s so I was either stoned or drunk at the time the dude really resonated with me.

Loved Raising Arizona Nick Cage can make as many crap films from now on that one was a cherry. (Although loved him in bring out your dead).