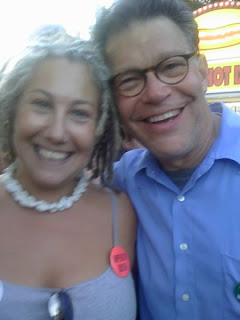 I love the Minnesota State Fair. It's a great place for people watching, goat petting, concerts, delicious food (on a stick) and politics.

Last Sunday, Tom & I went to see The Suicide Commandos in the Grandstand. Most of our friends were there, and we saw people we hadn't seen in years. It was like an old punk rockers reunion. We may be a little older & grayer now, but we can still rock with the best of 'em. 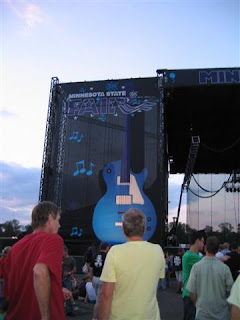 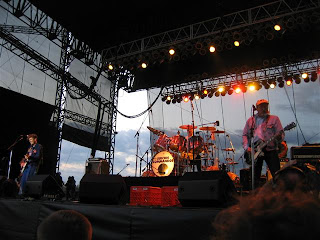 I paid a special visit to the Republican booth. It was uneventful. 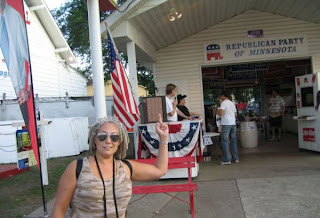 I went back to the Fair today with my sister, niece, and a friend. Again, I couldn't resist the Republican booth, but this time was different. While my sister & I were having a civil conversation with a young woman there, an older guy in a wheelchair rolled up and started some shit with us. It got a little ugly. He had his talking points, but when confronted with the facts, it only made him angrier. It ended with a shouting match about Iran. He's all gung ho about invading them next. When I asked him who we had left to fight the next war, he had nothing to say. Pure chickenhawk bullshit. You know the story.

Of course I also visited the DFL and Green Party booths. I had a lengthy conversation with Ken Pentel of the Green Party and came away thinking I should join them. They truly represent everything I want in a political party, so it's something I'm going to really consider.

The day ended in the best possible way. I met our next Senator, Al Franken. He had a ton of people around him, but he took a moment to have a conversation with me, as well as anyone else that wanted his time. I told him that I was from St. Louis Park (his home town.) When he asked me where in SLP, and I told him, he said he knew where that was. He was super-nice and had an aura of kindness about him, just like the late Paul Wellstone.

I may go back to the Fair one more time before they close up on Labor Day. Good times. 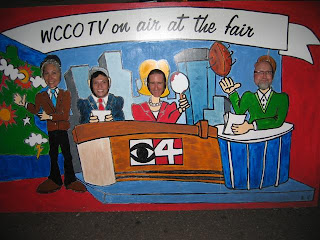 Although I disagree with a number of Al Franken's political beliefs (almost entirely fiscal), as could be expected when a minarchist views an unabashedly liberal Democrat, I think he may have some fresh views. He's made his fame and fortune outside of the Beltway, and that, for want of a better term, gives him a bit of street cred.

I rather disagree with him about the income tax. Of course, I would like to see it abolished along with several cabinet-level departments of the federal government, but in the meantime, I would like to see it flattened with a minimum threshold below which no taxes would be leveed, adjusted based on a consumer price index with special weighting given to fuel, energy, and food costs, which are the areas that have seen the most dramatic rise in the last few years. Kill most of the loopholes in the tax code while keeping the sensible ones, and make it simple enough to do with middle-school math. Otherwise, you end up with a "progressive tax" that's progressive in name only, one where people have to spend additional funds the disadvantaged can ill-afford just to figure the damned forms out and where the base income tax rate is artificially elevated because of said loopholes. Just because I'm a minarchist doesn't mean that I don't have ideas on an incremental approach to get there. :)

Wow, you got to meet and talk with Al Franken! I'm so glad he decided to run.

I did a coffee spit-take at the pic of you in front of the Repos' booth. Glad you gave the guy a reality check with some facts (for all the good it will do, right?)

Did you ever look up that article I gave you the link to, the one about the stealth reporter who went on a cruise with the neocons? He said every one of them just assumes we're going into Iran next, like that's a good thing.

Sounds like an interesting time at the fair. Even the run-in with the Let's-Invade-Iran chickenhawk probably added a little levity to the day.

I hope Al Franken has a better fate than Paul Wellstone.

Coolbeans! Thanks for sharing.

Sorry to hear about your chickenhawk adventure.

Great picture of you and Al.

I got to see him speak at the University of Washington when he wrote "Rush Limbaugh is a Big Fat Idiot". I've always admired his humor and fire.

MC, I must admit, I had to look up minarchist on Dictionary.com. So, are you a Ron Paul supporter? He sounds like a good fit for you. As Rebubs go, I like Ron Paul, but in the end, I can't support a pro-life candidate. I'm glad you had some positive things to say about Franken. I agree, he does have some street cred.

Candace, "coffee-spit take" -- LOL!
I read the article about the neocon cruise. It was jaw dropping. Those people are f*cked up, man.

Tom, I know what you mean. Franken better watch his back so he doesn't meet a similar fate. If I were him, I'd stay away from small planes. Yeah, the chickenhawk run-in was something I'll always remember, and I actually came away from it rather pleased with myself. I got the feeling that this man didn't get challenged often.

Thanks, J. I've admired Franken for a long time, as well. In the 70's, do you remember Al calling it the "Al Franken decade" on SNL?

Wow Lizzy, I would love to have a picture with Al Franken. Now that would make my day!
Sorry to hear that you had to spew with Republicans at the fair, but I'm sure that you educated them about what this country is tired of, as your post suggest.

Yeah, I thought the Al Franken decade bit was pretty funny. Remember when he played a reporter and he would walk around with some kind of little microwave dish on his back?

Great pic with Al Lizzy, and I spit my coffee out when I saw the pic at the GOP booth! Good stuff.

Whoa! What a great time you must have had!! GREAT pictures! I'd love to meet Al. And the one of you flipping the bird is priceless! GOOD JOB!

LT, Yes, meeting Al definitely made my day! The fight with the Repub guy wasn't so bad. I felt like I did a good job representin'.

J, Yep, I remember that. Wasn't it a big satellite dish on his head?

elvez, Thanks! Between you and Candace, that makes 2 spit-takes on one post. Cool!

I'm very much a Ron Paul supporter, but I come from a family of Romney supporters. I have issues with some of his stances on social issues, particularly his stance on abortion, but since he's an OB/GYN who has delivered north of 4,000 babies, I can even respect how he arrived at that stance. On the balance, though... He doesn't participate in the congressional pension plan, returns a portion of his Congressional budget to the Treasury each year, and voted against the Iraq War and the Patriot Act. As a result, I find him, on the balance, to be far closer to where I believe this country needs to be than any other candidate of either major party.

Oh, and one more thing about Franken: He's funny, unlike his self-appointed nemesis Bill O'Reilly. Then again, O'Reilly hates so many people I find it difficult to keep up, and only a few of those people actually deserve it, if for no other reason than they are just like him in, ahem, character and personality, if not in ideology. Great, now I just had a disturbing mental image of Bill O'Reilly and Ann Coulter having a love child. I suppose it would be named Damian and have "666" tattooed on his forehead.