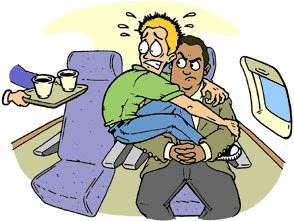 When I was young, I loved to fly. For me, the best part of family vacations was getting on an airplane.
As I got older, and anxiety problems and OCD set in, a fear of flying began to grow. It may have started when Reagan fired the striking air traffic controllers, and then got worse when the Lockerbie flight exploded in Scotland, and later, the mystery of what brought down TWA flight 800 near Long Island freaked me out big time.
And then 9/11 happened.
I have flown one time since 9/11. Tom & I flew to New York in 2002 to see my family. I almost broke his hand during take-off.
In the last few months, I have purchased and cancelled two trips to see friends in California.
On Wednesday night, there is a dinner honoring my brother in New York. I will be traveling with my sister and her two grown children.
You could say that I'm a little nervous.
Posted by Lizzy at 6/05/2007 01:53:00 AM

I understand. I do not like to fly and avoid it at all costs. I have flown once since 9-11 and it was only to the Cayman Islands. I was never crazy about flying but now it is more like a nightmare to me.

If you drink cocktails, I would suggest a couple before the flight. That's what I did that time when I last flew.

I've never liked flying, particularly landings and take-offs and the possibility of problems happening, but like the chance of being caught in an act of terrorism, I just figure it isn't likely to happen to me at all, and if it does, so be it.

I think it's odd that even though going somewhere in a car is statistically much more dangerous than flying, more people are afraid of flying... I know it bugs me more to fly than to drive... but I would rather drive anyway, because for me, getting there really IS half the fun. For an overland trip, I would choose to drive over flying just about anyday. After all, you can't get to tacky roadside attractions when you're in a jet!

Yep, pissed off patricia, cocktails may be in order.

Snave, The take-offs & landings are the worst part for me, too.

As far as driving, if it weren't so far, I'd consider it. We drove out there several times when I was a kid and I always got car-sick...not good memories.

Now that I'm an adult, I might enjoy a road trip like that, and there's the additional benefit of not worrying about falling 30,000 feet.

Oh yeh Lizzy I feel ya, I despise flying too. When I was little I loved it as well, I used to fly from VA to New Mexico to spend the summer with my Grandparents from age 8 to 11. Now I hate it. I love travel, but I hate the plane, Europe is as far as I can ever see myself flying, any longer and I would die. Have a safe trip, at least NY isn't a terribly long flight.

You're going to have a great time. Flying is still safer than a road trip - and faster, too. Landing is the best part - you're there.

If you drink, make sure you drink a lot of water, too, so you don't get dehydrated.

"Flying is still safer than a road trip"

I'd rather enjoy the road trip.
Maybe I'll express my reasons after Lizzy is back in MN, I'd rather not worry her with the reasons that the above quote isn't true while she's on her trip.

Can't say i've ever had a fear of flying had my first flights as a kid and was hooked ever since hence the licences for both fixed wing and choppers (I love choppers more). Actually I pretty sure my fixed wing currencies ran out last year ... whoops.