"Sicko" Is Completed and We're Off to Cannes! 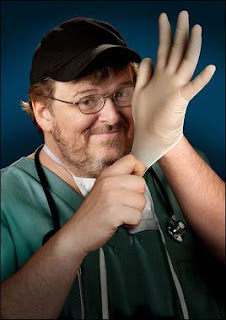 "Sicko" Is Completed and We're Off to Cannes!
Friends,
It's a wrap! My new film, "Sicko," is all done and will have its world premiere this Saturday night at the Cannes Film Festival. As with "Bowling for Columbine" and "Fahrenheit 9/11," we are honored to have been chosen by this prestigious festival to screen our work there.
My intention was to keep "Sicko" under wraps and show it to virtually no one before its premiere in Cannes. That is what I have done and, as you may have noticed if you are a recipient of my infrequent Internet letters, I have been very silent about what I've been up to. In part, that's because I was working very hard to complete the film. But my silence was also because I knew that the health care industry -- an industry which makes up more than 15 percent of our GDP -- was not going to like much of what they were going to see in this movie and I thought it best not to upset them any sooner than need be.
Well, going quietly to Cannes, I guess, was not to be. For some strange reason, on May 2nd the Bush administration initiated an action against me over how I obtained some of the content they believe is in my film. As none of them have actually seen the film (or so I hope!), they decided, unlike with "Fahrenheit 9/11," not to wait until the film was out of the gate and too far down the road to begin their attack.
Bush's Treasury Secretary, Henry Paulson, launched an investigation of a trip I took to Cuba to film scenes for the movie. These scenes involve a group of 9/11 rescue workers who are suffering from illnesses obtained from working down at Ground Zero. They have received little or no help with their health care from the government. I do not want to give away what actually happens in the movie because I don't want to spoil it for you (although I'm sure you'll hear much about it after it unspools Saturday). Plus, our lawyers have advised me to say little at this point, as the film goes somewhere far scarier than "Cuba." Rest assured of one thing: no laws were broken. All I've done is violate the modern-day rule of journalism that says, "ask no questions of those in power or your luncheon privileges will be revoked."
This preemptive action taken by the Bush administration on the eve of the "Sicko" premiere in Cannes led our attorneys to fear for the safety of our film, noting that Secretary Paulson may try to claim that the content of the movie was obtained through a violation of the trade embargo that our country has against Cuba and the travel laws that prohibit average citizens of our free country from traveling to Cuba. (The law does not prohibit anyone from exercising their first amendment right of a free press and documentaries are protected works of journalism.)
I was floored when our lawyers told me this. "Are you saying they might actually confiscate our movie?" "Yes," was the answer. "These days, anything is possible. Even if there is just a 20 percent chance the government would seize our movie before Cannes, does anyone want to take that risk?"
Certainly not. So there we were last week, spiriting a duplicate master negative out of the country just so no one from the government would take it from us. (Seriously, I can't believe I just typed those words! Did I mention that I'm an American, and this is America and NO ONE should ever have to say they had to do such a thing?)
I mean, folks, I have just about had it. Investigating ME because I'm trying to help some 9/11 rescue workers our government has abandoned? Once again, up is down and black is white. There are only two people in need of an investigation and a trial, and the desire for this across America is so widespread you don't even need to see the one's smirk or hear the other's sneer to know who I am talking about.
But no, I'm the one who now has to hire lawyers and sneak my documentary out of the country just so people can see a friggin' movie. I mean, it's just a movie! What on earth could I have placed on celluloid that would require such a nonsensical action against me?
Ok. Scratch that.
Well, I'm on my way to Cannes right now, a copy of the movie in my bag. Don't feel too bad for me, I'll be in the south of France for a week! But then it's back to the U.S. for a number of premieres and benefits and then, finally, a chance for all of you to see this film that I have made. Circle June 29th on your calendar because that's when it opens in theaters everywhere across the country and Canada (for the rest of the world, it opens in the fall).
I can't wait for you to see it.
Yours,
Michael Moore
P.S. I will write more about what happens from Cannes. Stay tuned on my website, MichaelMoore.com.
Note from Lizzy: I can't wait to see this. I've been checking IMDb once a month for the past year for info on this film. Moore is my favorite documentary filmmaker, by far. He was one of my inspirations for going to film school.
Posted by Lizzy at 5/18/2007 10:00:00 AM

I hope Moore has not only gotten a copy hidden somewhere, but that he is already finding a way to get it onto DVD. If the Bush administration confiscates the movie, I think all hell will break loose, and they will be playing into his hands more than they are already. I don't think they are stupid enough to take the movie away, but if they are, they will deserve whatever punishment they get for doing so.

I don't the movie will be censored or confiscated. In 2004 a group of rightwing pervs called "Move America Forward" tried to ban Fahrenheit 9/11. Didn't work.

Good for MM. He is definitely one of the good guys.

I cant wait for the movie to start.

I don't think this President or his Administration have the power to confiscate the movie, but with Bush riding shotgun, who knows.

I don't know what I want to see more..the movie or how the fascist wingnuts paint Moore out to be an America Hater. Should be a hoot either way.

Did you hear about the college student who protested "An Inconvenient Truth" being played in his classroom?

I didn't know they still made young Republicans....Shouldn't they all be in Iraq?

I don't know... in the future there will be a need for a new generation of Chickenhawks to take the place of the old guard, so if there are Young Republicans on campuses around the country instead of serving in their favorite war, I think that's why they're still around...

Lizzy, I can't wait for this movie, either!
Hey, wasn't it Woody Allen who said, "There's no such thing as a young Republican?" :)
Yes, they should definitely get their butts down to the recruiting office, and join the long line of soccer moms I'm sure are already there to enlist, right behind the Bush and Cheney kids.

I can't wait for this thing to come out. I agree with you guys if the fascists try and stop this doc, it will backfire severely. Moore is truly a hero of mine.

I can wait. F911 was actually a let down after Bowling for Columbine.

The government lied about the dangers of ground zero and the surrounding area and now they are simply waiting for the victims of that lie to die (which honestly science and medicine can't save).
I'm curious though if the film raises a question I asked for months following 911.
What happened to the depleted uranium or tungsten ballast and counter weights from the planes.
I have been entirely unable to get answers to what the ballasts and weights were made of, or what happened to them from Boeing, any government agencies and the media.
All requests are met with complete silence.

Hopefully a lot of the questions about why the EPA deemed ground zero "safe" will be answered in true Michael Moore fashion.

The concept of young Republicans leaves me scratching my head, too. It always has.

I hope Moore has many copies of his film buried in several undisclosed locations.

The film comes out June 29th. I wish we could all go together!

June 29 is my 50th birthday. That will be a great thing to remember about my 50th!

While I probably won't get to see the film on its release date anywhere here in NE Oregon, my younger daughter will be moving to Portland for college, and we will be making several trips down there this summer... and I will definitely see the movie!!

And now...FAUX News has weighed in on 'Sicko', calling it: "brilliant and uplifting"!?