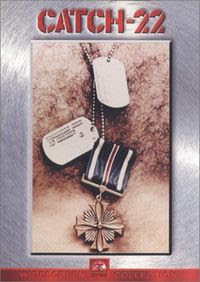 Every week in film school, our instructor assigns us to watch a film from a specific time period and then write a paper on it. The first assignment was to watch a film made before 1955. I watched Hitchcock's "Shadow of a Doubt." The next week we had to watch a foreign film pre-1955, so I watched Nosferatu. From there was Jaws, The Sting, LA Confidential, Hitchcock's Notorious, Fellini's 8 1/2, and even Hudson Hawk (my instructor picked that last one.)

When he assigned us a film between 1955 - 1974, I took the opportunity to watch 1970's Catch 22. Tom had always said that I should see it, and he was right.
If you haven't seen the film, or read the book, do yourself a favor and rent it. The film is more relevant today than ever. I swear, the Bush administration must have watched it before planning the war. Catch 22 has it all -- war profiteering, maniacal leadership, extended never-ending tours of duty, descents into madness, and then there's the scene where the Americans bomb themselves.
Sound familiar?
Posted by Lizzy at 5/21/2007 07:22:00 PM

One of my favorite movies from my college years...my roomates and I would get high and watch that over and over...along with some Monty Python, Dr. Stranglove, and quite a few others actually...

Ever see The Razor's Edge?

Catch-22 is a great book. I don't know if I've ever seen the movie all the way through, I should rent it sometime....

I was curious, why did the teacher pick Hudson Hawk to represent it's time period?

I read Catch 22 a long time ago, maybe I should read it again.

I haven't seen The Razor's Edge, PoliShifter. Is that the one with Bill Murray?

J, We watch some films for different reasons. He showed us Hudson Hawk because it uses obvious examples of the 3 act structure.

PoP, I know they say that the book is always better than the movie, but maybe not in this case. Plus, it has a star-studded cast. It's absolutely wonderful.

I read the book "catch 22" years ago, I guess I had better rent the movie.

Hope you did well in your exams-- I guess you are back in full force.

That news really put a smile on my face and a feel good feeling in my heart.